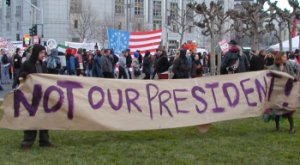 Breaking News Reports from the protests in San Francisco. Pirate Cat TV and Radio and Enemy Combatant Radio provided live coverage of the NION and ANSWER rallies and marches. For links to additional reporting nationwide, see US Indymedia and Freeway Blogger

Many forms of protest were called for January 20th, 2005, the date of George Bush's inauguration into his second term, from a general strike to a total boycott of the US to specific street protests. A call was put out for student walkouts on January 20th. A call for a General Strike on January 20th was also announced well in advance of the date.
2+2=Five: One person's call to action

In San Francisco, Not in Our Name Sonoma County staged a "mock inauguration" in front of the San Francisco Federal Building. Photos NION Bay Area held a rally at 4 pm at Powell & Market and hundreds of people marched from there to an ANSWER Coalition rally at Civic Center. After about an hour of speakers, the crowd of several thousand people marched down Market street to Justin Herman Plaza. Photos: 1 | 2 | 3 | 4 | 5 | 6 | 7 | 8 | 9 Report: 1 | 2 | 3
Also in San Francisco, Veterans for Peace held an all-day vigil in protest of Coronation Day. For nearly ten-hours, the names of Iraqis and US troops killed in the current unjust war and occupation were read aloud. Photos

In Eureka, over 100 people rallied at the court house calling to "Impeach Bush." Photos
In Fresno, several dozen people rallied on PeaceCorner. Video
In Humboldt and Mendocino, there were reports of several demonstrations.
In Palo Alto, an Inauguration Day Peace Protest gathered at 5pm. Photos: 1 | 2
In San Jose, a Protest for Peace gathered at 5pm at the Federal Building and marched to Cesar Chavez Plaza. Photos
In Sacramento, a Counter Coronation was held on the 20th. Photos | Report
In Modesto, a Still Not Our President! Counter-Inaugural was held in on January 21st.
In Santa Cruz, 400 protesters turned out for a march and rally. Photos | Video | Santa Cruz Indymedia Coverage

Not in Our Name called for people to hold up banners and signs during the morning commute with the theme "Not Our President." Posts to Indybay indicate that "freewayblogging" was rampant: Photos: 1 | 2 | 3 | 4 Video: 1

In spite of permit difficulties, ANSWER and thousands of people were in the streets of Washington, DC along the route Bush will take to the inauguration ceremony. The website Counter-Inaugural.org said that "a coalition of social, political, and religious activists have come together to protest the coronation of George W. Bush." 11/24 Counter Inaugural update ReDefeatBush sponsored several events in Washington, DC, including a CounterInaugural Ball. Anarchist Call to Action in DC. Perspective: Why I am protesting J20 Organizing 1/19 report from DC Photos and report from anti-fascist and anarchist protests DC. Free Radio Santa Cruz Audio of Inauguration Protest Call-ins Reclaim the Streets in San Diego DC Indymedia Protests also took place in many other cities around the US.