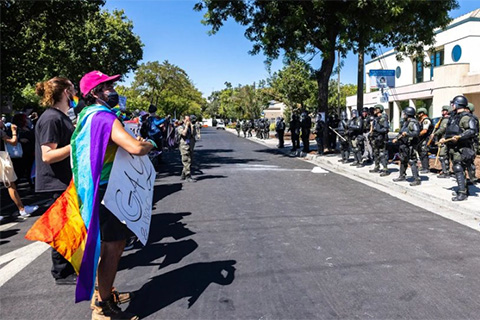 On August 27, ﻿﻿anti-LGBTQ+ bigots, Proud Boys, and other white nationalists held a Straight Pride rally in the Central Valley town of Modesto, California. After announcing their rally location weeks ahead of time, only thirty alt-righters showed up at the Planned Parenthood location. There they faced about two hundred reproductive justice and LGBTQ-rights supporters who shouted down the small group of right wing extremists.

After the opposing groups clashed for about 20 minutes, police in body armor stepped in with tactical gear and declared the scene an "unlawful assembly", justifying their action by saying that a shrub was lit on fire and that fights had broken out. Police cleared the area near the Planned Parenthood using pepper ball guns, but not before supporters of reproductive rights faced off with a police line, shouting at them. There were several arrests.