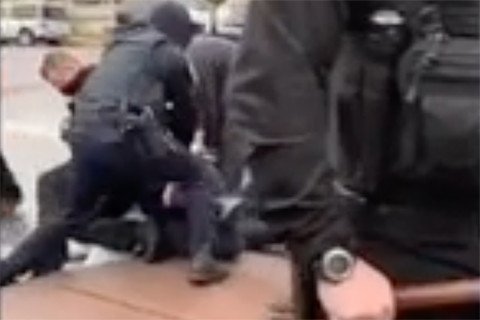 On January 24, Voices of VV held a mutual aid event in Vacaville in which they provided food, hygiene products, and other supplies to the community, as well as a community clean-up. Afterward, as everyone was leaving, one person was pulled over for expired tags by an entire team of Vacaville police officers with six vehicles. Nine people, including Voices of VV members, arrived soon after to record and cop watch. More police then arrived, in riot gear and heavily armed with wooden batons in hand and others with guns. The officers declared six of the observers standing and recording to be an “unlawful assembly” and forced them down an alley way.

The founder of Voices of VV, a Black woman, was specifically targeted. An officer can be heard pointing to her and saying, "Yes, her, grab her!" Police tackled her, put all their weight on her, with their knee in her back and neck. They twisted her arm and held it so tight that she sustained bruises on her arms and wrists.

Two others attempting to protect her were tackled and assaulted to the point of sustaining injuries, and were arrested immediately after. Remaining observers were able to get away without being arrested, but not unharmed. Vacaville Police confiscated the phones of all those arrested as "evidence," despite the arresting charge being "failure to leave the scene of a riot" and has yet to return them.