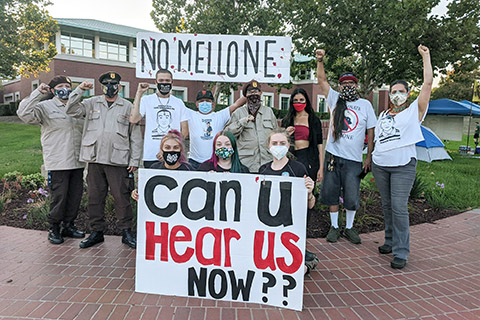 On September 4, five young activists from the city of Antioch and a former resident of the Mission District of San Francisco began a hunger strike with demands for local authorities to end racial injustice and police brutality. Despite ongoing protests, a petition signed by thousands, hundreds of public comments sent in to City Council meetings, protests and an occupation of City Hall by several dozen activists, the Mayor, the Chief of Antioch Police, and council members have neither acknowledged nor taken action to address protesters’ demands. The young people of Antioch feel forced to take this serious action in order to be heard. They are known as the 6 Forced to Strike.

Their number one demand is the immediate termination of Officer Michael Mellone from Antioch Police Department for his known record of illegally using lethal force in the killing of Luis Góngora-Pat in San Francisco, and new surfacing allegations of abuse of force in Antioch. They are also demanding the immediate resignation of Steve Aiello as President of Antioch Police Officers’ Association for promoting violence against peaceful protesters.

Ofc. Mellone is known to have moved back and forth, at least 7 times, between police departments in Oakland, Richmond, Antioch and San Francisco since 2002, with prior complaints of excessive use of force from a prior period of employment in Antioch. This year it became known that he left the San Francisco Police Department on August 18th—a day before SFPD’s Internal Affairs was set to hand down a historic suspension for violating almost every SFPD rule in the book when he fired two different lethal weapons that resulted in the killing of Luis Góngora Pat—and began working days later with the Antioch Police Department.