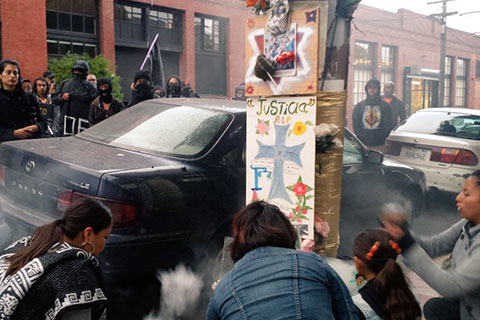 One-Year Anniversary of the Death of Luís Góngora Pat, Killed by SFPD
March Against Police Terror in the Sanctuary City of San Francisco on April 7

Luis Góngora Pat was a 45-year-old indigenous Mayan Mexican, an immigrant worker, and a family man who for a decade and a half supported his wife and three children in the small town of Teabo in southern Mexico by sending remittances from his dishwasher and line cook earnings. In 2013, he and his brother were illegally evicted from their home in the Mission District during the peak housing crisis of San Francisco, after which they became homeless.

Extended family helped his brother José get back on his feet, and the plan was to help Luis next, but his life was brutally ended before then; a victim of police terror in the Sanctuary City of San Francisco. Luis was killed by Sergeant Nate Seger and Officer Michael Mellone of the San Francisco Police Department only 28 seconds after their arrival on Shotwell Street.

On Friday, April 7, 2017, the one-year anniversary of his death, Luis’s family will march against police terror in the Sanctuary City of San Francisco. The event starts at 10 a.m. with a memorial altar at Shotwell and 19th.

Family of Luís Góngora in Teabo, Yucatán on the One-Year Anniversary of His Killing by SFPD |

See Also: San Francisco: March and Rally in Solidarity with Oaxaca and Against the Police | Resistencia desde Califas a Oaxaca