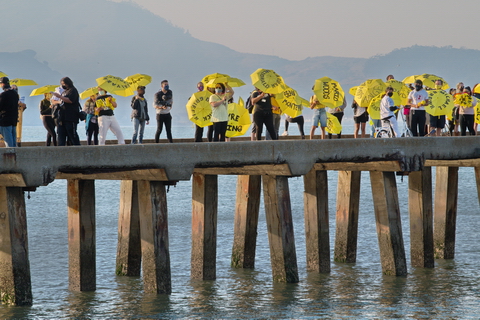 March for the Dead, Fight for the Living at the Golden Gate
Bridge Demo Organizers Call Confrontation with Police a Rehearsal for November 4

On the afternoon of August 21, organizers and protesters met at the Crissy field Warming Hut for a protest march across the Golden Gate Bridge. The march was to honor those who have died from coronavirus and police brutality, to fight for the living, and to demand Trump's resignation in solidarity with simultaneous marches across the Brooklyn Bridge and other bridges in U.S. cities on the same day. Assembling at the foot of the south tower, activists held a rally with speeches and shield training.

Just ahead of the rally protesters drew the names of victims of police violence on bright yellow umbrellas. After speeches by relatives of victims of COVID-19 and police brutality, they walked out on a long pier adjacent to the bridge for a colorful display. They continued their action with a march to the pedestrian walkway of the bridge and were halfway there when police, who had responded in dozens of vehicles, intervened. The marchers pushed on and faced off with police in a physical confrontation at the gate to the pedestrian walkway.

Organizers said that Trump will declare victory on election night no matter what actually happens. One stated in an email to allies, "How we react will determine if American democracy survives. Everything we do now is an effort to plan, train and act, so that we can protest safely, effectively and non-violently starting November 4, 2020." The next day, another organizer said, that "If the goal was to mourn on our bridge, we failed. If we wanted a rehearsal for the show that’ll open November 4, we succeeded. We can’t open after just one rehearsal, though."

March for the Dead, Fight for the Living at the Golden Gate |

Leap of Peace, Day of Mourning near Golden Gate Bridge |

Golden Gate Bridge Action: "Confrontation with Police Was a Rehearsal for November 4" |

San Francisco: March for the Dead, Fight for the Living