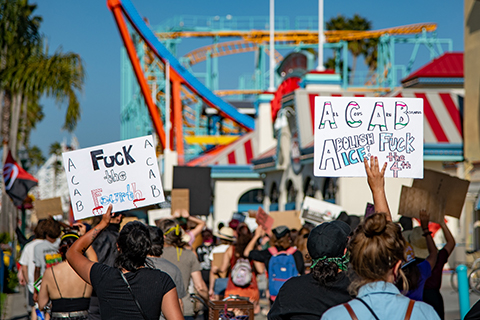 At a rally in front of San Francisco City Hall speakers said, “We will fight for justice on the streets and at the polls,” as they encouraged youth to not only vote, but get involved in community politics and action. In a separate action, a caravan that started at City Hall made stops at the African American Arts and Culture Complex where speakers demanded that San Francisco police be defunded. Their next stop was Nancy Pelosi's Pacific Heights house where protesters spray painted a message to the Congresswoman, "Pelosi Defund War $" on the road. The caravan protest brought together climate justice activists, anti-war activists, and the Black Lives Matter movement.

In Santa Cruz, a march starting at the Town Clock traveled down Pacific Avenue to the city’s police department, where demonstrators burned an American flag and two "thin blue line" police flags. From there, they marched to the Beach Flats Community where many residents cheered the demonstrators. The group returned to their start point, where they burned more American flags.

Fuck the Fourth, Love Your Friends |

San Francisco 1: Assembling for Equity on the Fourth of July |