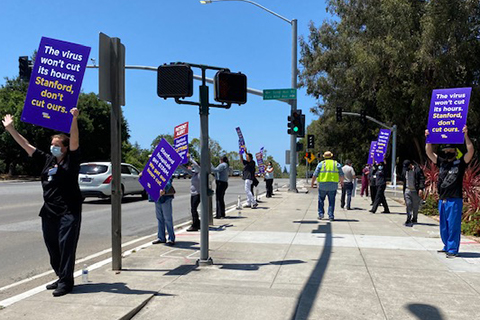 Stanford Hospital healthcare workers are facing a choice that is not really a choice. Employees and members of the public were shocked to learn that Stanford Health Care recently demanded frontline workers “share the sacrifice” in this time of pandemic, that they choose between being furloughed, taking paid time off early, or accepting a 20% pay cut over a 10-week period.

On May 21, dozens of hospital workers joined by concerned members of the public protested in Palo Alto on all four corners of a busy intersection. They hoisted signs including ones that read “Stanford caregivers deserve respect” and “Stanford thanks its healthcare heroes with pay cuts!” Many people driving along the El Camino honked their car horns in support.

Critics point out that Stanford is cutting costs on the backs of the workers even after receiving federal funding to pay them. Stanford Health Care received more money from the federal CARES Act stimulus package than any other health system in California. The $102.4 million is more than twice what they are estimated to be saving by cutting frontline employees’ pay during the coronavirus pandemic.