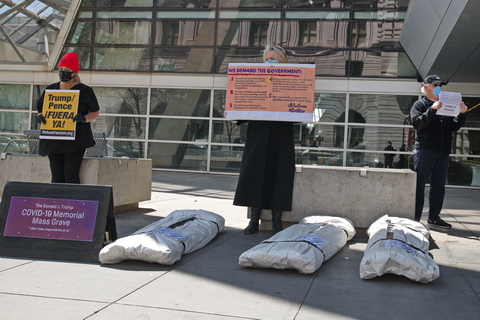 On April 19, protestors in San Francisco joined nationwide demonstrations that dumped body bags at Federal locations and Trump properties. In Chicago, Cleveland, Detroit, Los Angeles, NYC, Philadelphia, and San Francisco, RefuseFascism supporters delivered home-made body bags, saying, "We recognize the Trump/Pence regime, with its opposition to science and its fascist program now poses an even greater danger to humanity due to the COVID-19 pandemic."

Citing more than three years of Trump consolidating an "American Fascism," the March 2020 RefuseFascism Statement of Conscience reads, "The regime bludgeons the very notion of objective truth; trafficking not merely in lies, but in flagrant campaigns of disinformation."

Trump is an American Virus, it’s time to Break the Silence! (4/7)