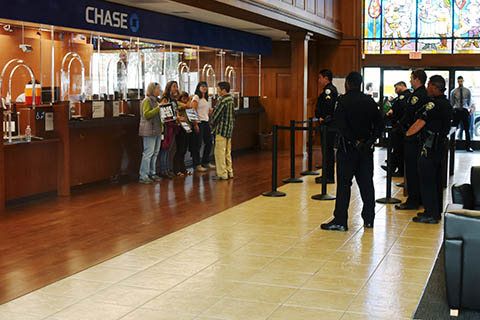 Approximately 300 protesters descended on the Chase branch in Santa Cruz on February 28 to demand an end to the bank's financing of the fossil fuel industry. Five people stood in front of the teller windows to stop all banking transactions. Protesters successfully shut down the bank for the remainder of the day.

Meanwhile, outside the bank, demonstrators sang and danced while offering water, cookies, chair massages, blankets and throw pillows. A flash mob dressed in disco outfits danced to “staying alive.” Those who participated in the dancing and singing were of all ages. As rush hour traffic drove by, motorists honked their horns in support while creative participants chalked the walkways outside the bank with many messages.

Chase, Wells Fargo and BofA are Protested In San Anselmo