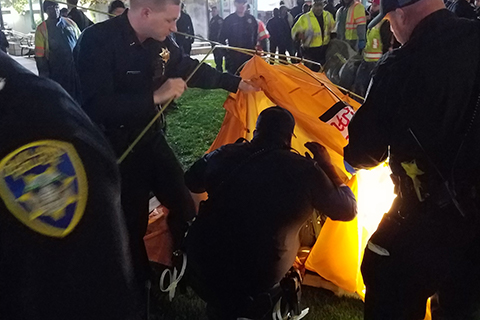 On November 24, what was to be known as the Housing Justice Village began to take shape in Oscar Grant Plaza in front of Oakland City Hall. Housed and unhoused activists set up a number of tents on the grassy lawn. An informational canopy tent was set up on the pavement, followed by a food tent. Donations flowed in. The action was intended to close out the East Bay Housing Justice Week of Action, while opening a second, street-level front after Moms 4 Housing reclaimed a vacant investor-owned house in West Oakland earlier in the week.

In a political show of force, the city of Oakland directed a small army of police to mass arrest and jail 22 of the demonstrators, for nothing more than setting up tents in front of city hall to protest the city's never ending war against the homeless — the city's encampment demolitions and evictions, the towing of residential vehicles, and a lack of earnestness and urgency in addressing the housing crisis. Most arrestees spent at least 24 hours in Santa Rita, and some remained jailed for over two days, on what would otherwise be a citeable infraction, being in the park after dark. On December 2, arrestees held a press conference to address the city's attack and why they protested in the first place.