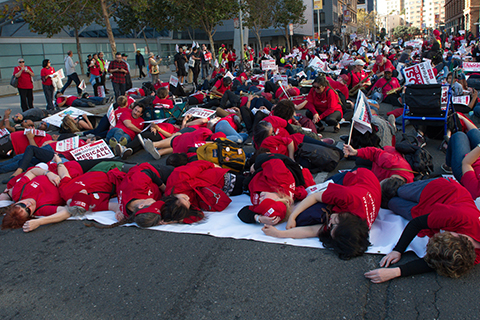 On November 1, Nancy Pelosi said she is "not a big fan of Medicare for All." U.S. Representative Anna Eshoo (District 18, portions of San Mateo, Santa Clara and Santa Cruz counties) who chairs the Subcommittee on Health has been criticized for being "in the pocket of Big Pharma." At rallies in front of both Congresswomen's offices this fall, protesters asked why neither of them represent what their constituents want.

Activists in Anna Eshoo's district marched on her office in September. They delivered a petition of over 1,000 signatures calling for Eshoo to co-sign Medicare for All bill. The protest, led by National Nurses United and Santa Clara County Single Payer Coalition, started with a march through downtown Palo Alto and wound up at Eshoo's office door. Speakers said the Congresswoman has made it abundantly clear she is against eliminating for-profit insurance companies from our healthcare system and replacing them with a non-profit federal system.

The day after Pelosi's pronouncement on healthcare, protesters were on the streets near her San Francisco office demanding that she fight for House Resolution 1384, the Medicare for All bill. An estimated 2,000 people joined in the protest that started at United Nations Plaza. The statewide event featured speakers from the California Nurses Association as well as from National Nurses United and other movements. Teachers, doctors, truck drivers, students, roller skating enthusiasts, and musicians came to make noise about the issue. A die-in was staged in front of Pelosi's office.

Both Congresswomen will face opposition from candidates who support Medicare-for-All. The primary election in California is set for March 3, 2020.

Demonstrators for Medicare for All March on Office of Congresswoman Eshoo | Which side are you on, Representative Anna Eshoo?