Add an Event
Newswire
Calendar
Features
Home
Donate
From the Open-Publishing Calendar
From the Open-Publishing Newswire
Indybay Feature
Publish to Newswire
Add an Event
Related Categories: San Francisco | Government & Elections | Health, Housing & Public Services
Nurses Lead Protest at Pelosi's Office After She Says "Not a Big Fan of Medicare For All"
by R.R.
Tuesday Nov 5th, 2019 4:09 AM
National Nurses United planned the rally, march, and die-in months in advance, but the timing couldn't have been better. On November 2nd, the day after Congresswoman Nancy Pelosi who represents the City of San Francisco said, "I am not a big fan of Medicare for All" protesters were on the streets near her San Francisco office demanding that she fight for House Resolution 1384, the Medicare for All bill. 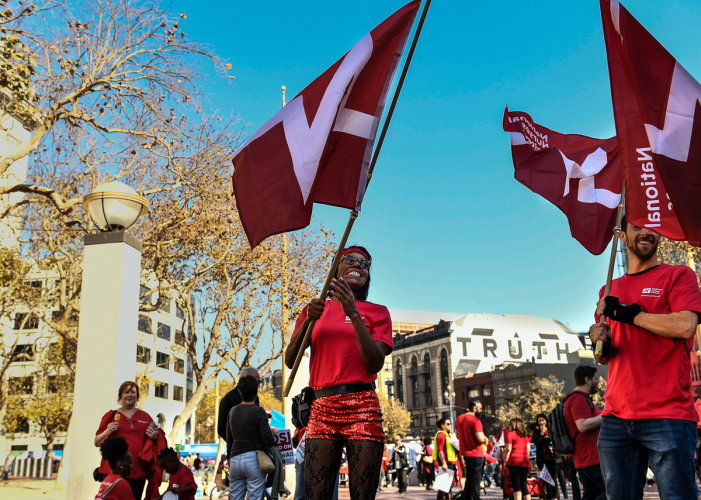 
Why does Nancy Pelosi say she is not fond of Medicare for All despite strong support for it among the majority of her caucus and an estimated three-quarters of Democratic voters? National Nurses United wrote that the Congresswoman may not be a "big fan" ...but nurses ARE!

America is a health-care outlier in the developed world in that it is the only large rich country without universal health care. In fact, single-payer programs in other nations such as Canada, Taiwan, and Australia show that it's possible to provide high-quality care for everyone at about half the cost, per capita, of what the the U.S. is spending now.

An estimated 2,000 people from many walks of life joined in the protest that started at the United Nations Plaza. The statewide event featured speakers from the California Nurses Association as well as from National Nurses United and other movements. Teachers, doctors, truck drivers, students, roller skating enthusiasts, and musicians came to make noise about the issue.

National Nurses United said in a statement, "We know that Medicare for All is the only true solution to the health care crisis. But we will only win when a mass movement of people stand up and demand it." One individual commented, "Private insurance is at all odds with public interest. Mounting co-insurance and deductibles are breaking budgets...the fact that a chance encounter with cancer or an accident could bankrupt my family is a stress I don’t feel I should bear in my privileged first world country."
§Carrying the Red Flags of NNU
by Doctors, Truck Drivers, Teachers Join Demo Tuesday Nov 5th, 2019 4:09 AM 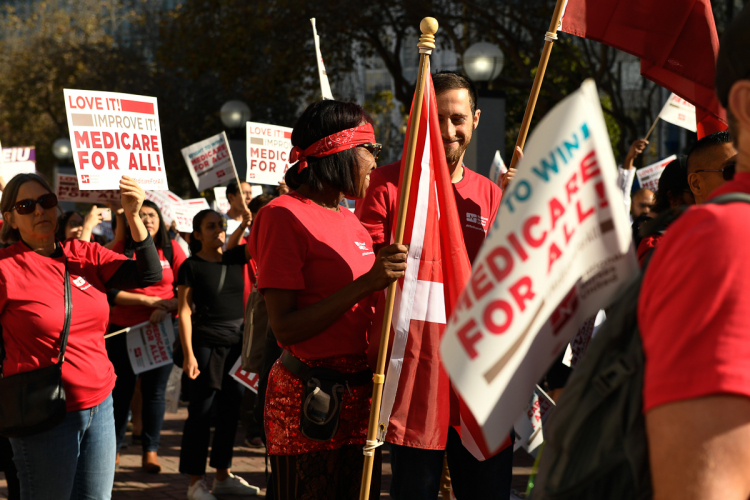 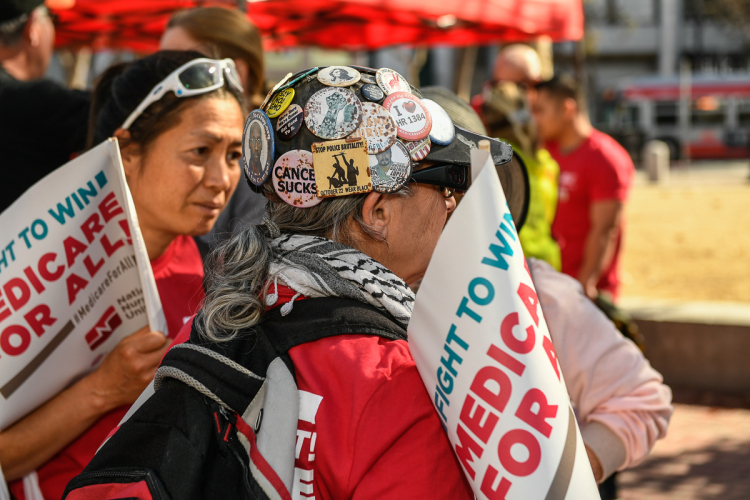 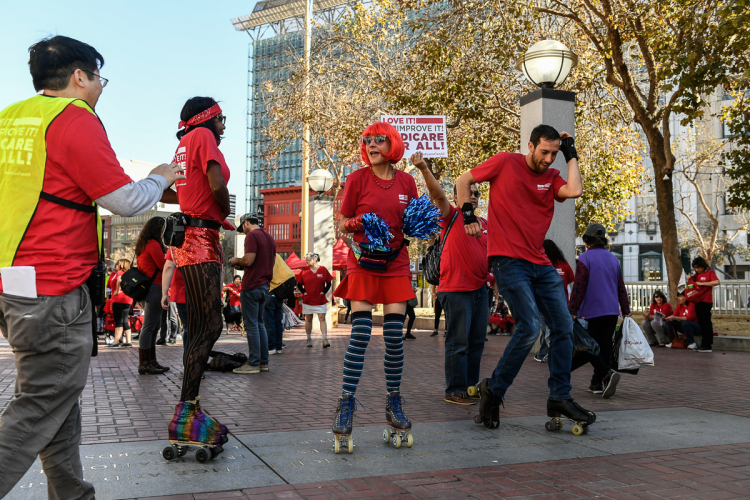 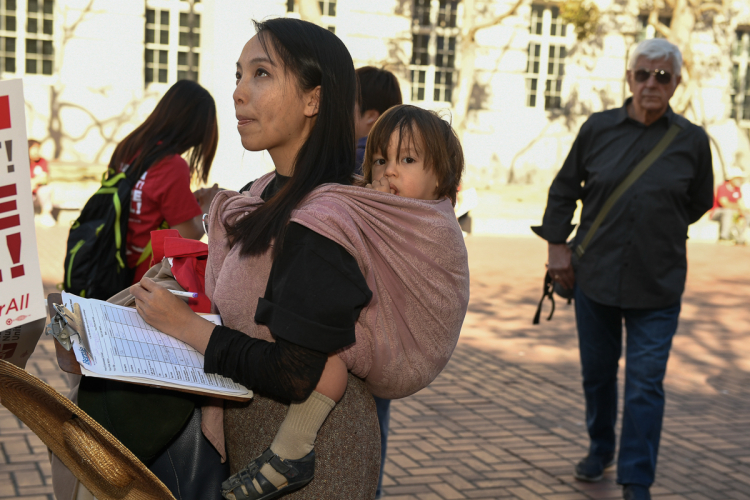 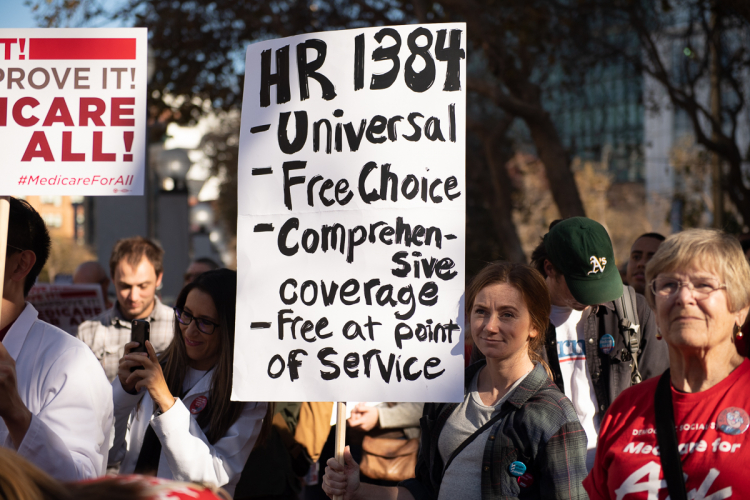 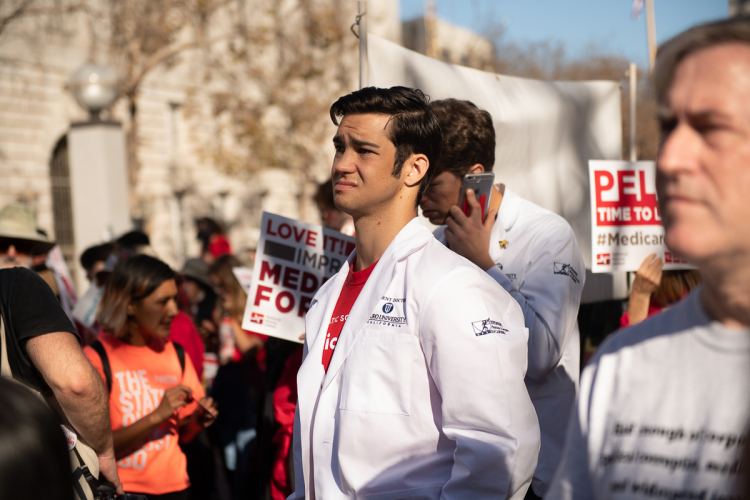 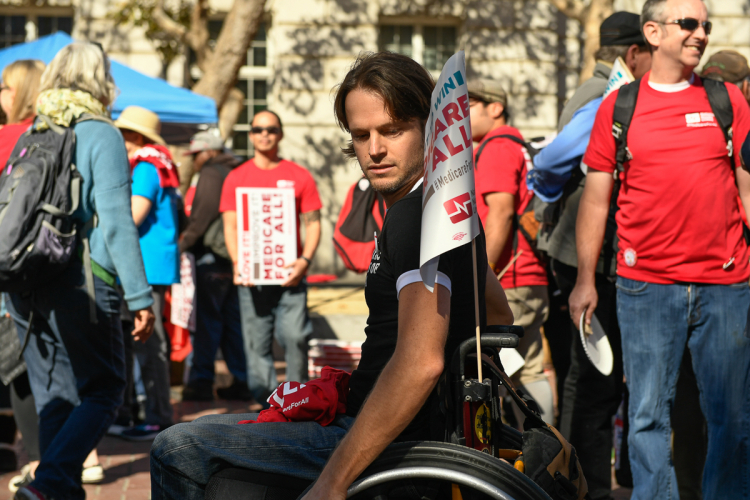 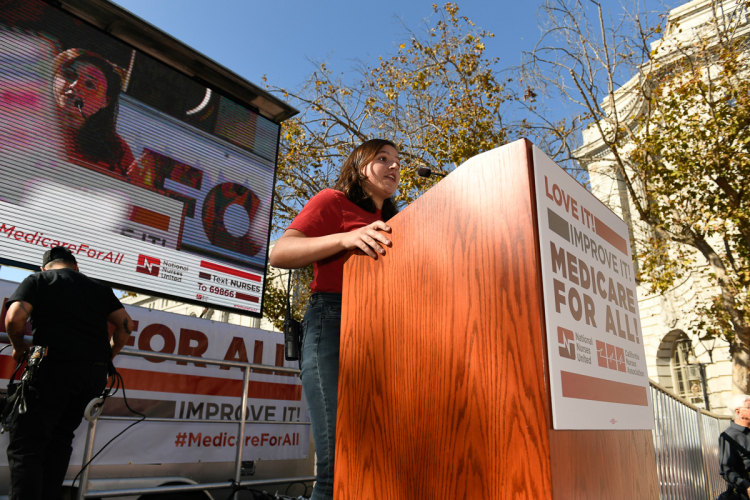 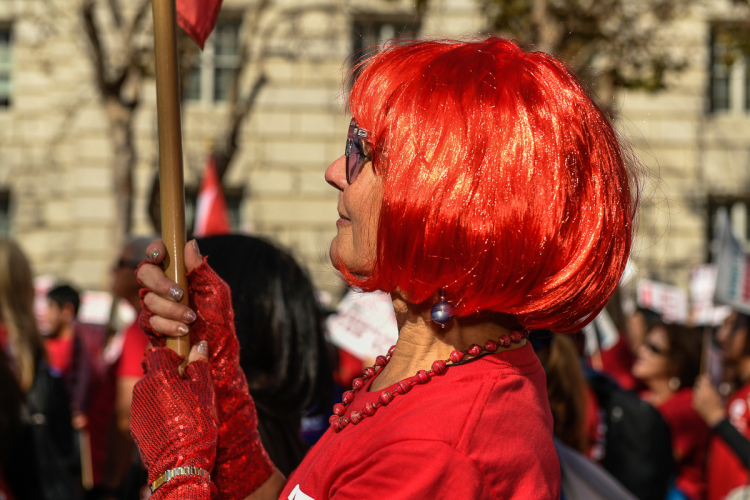 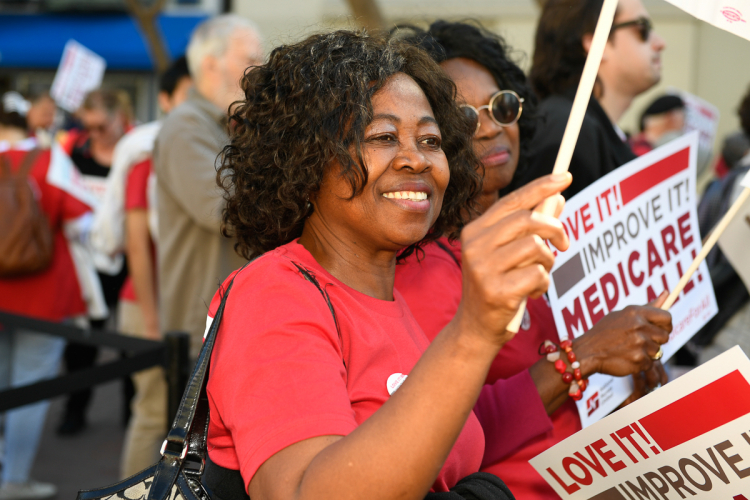 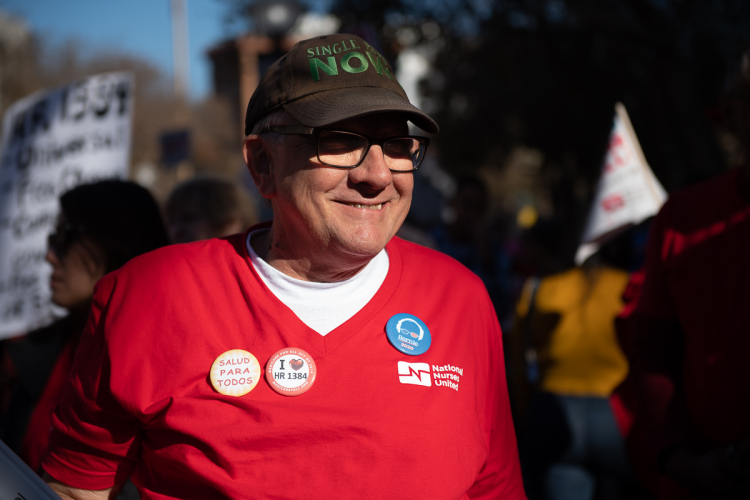 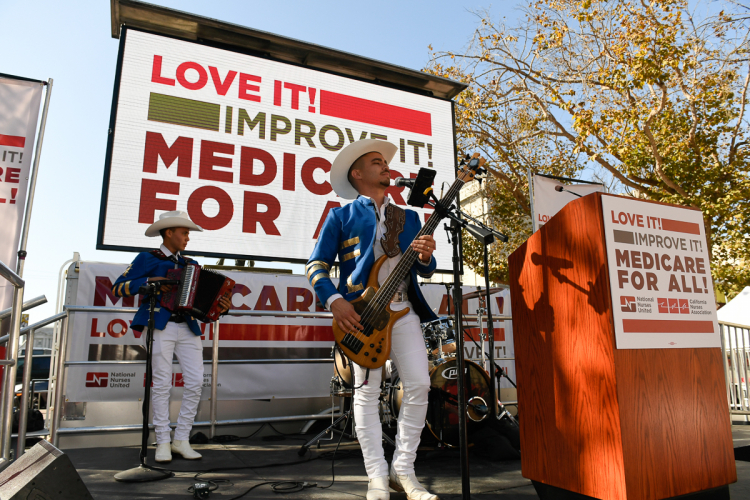 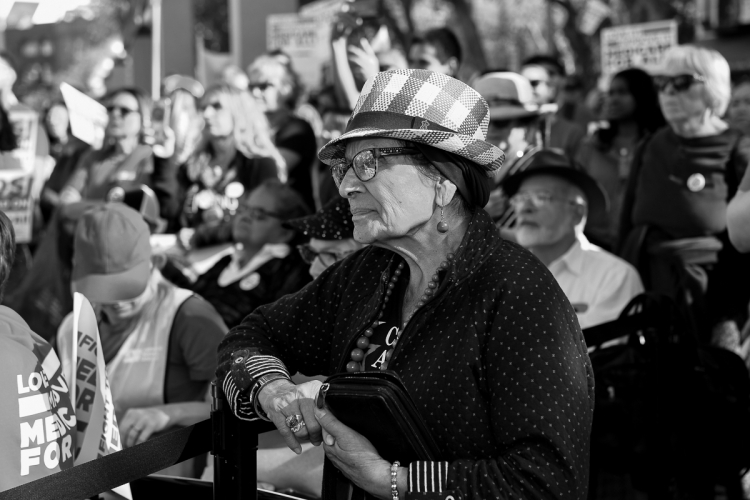 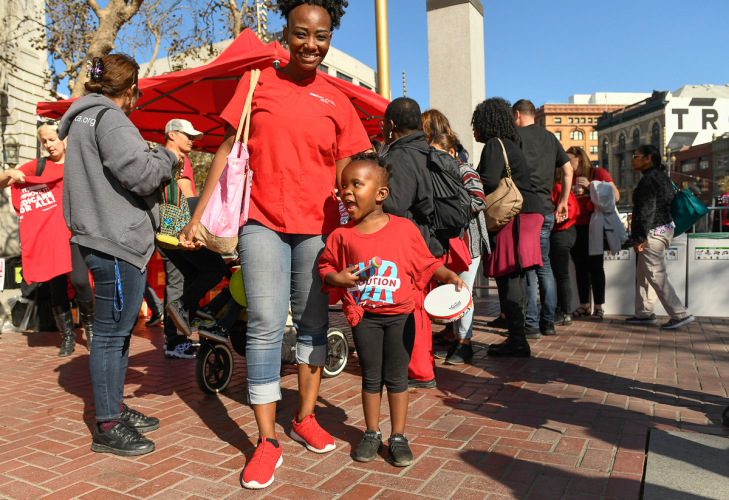 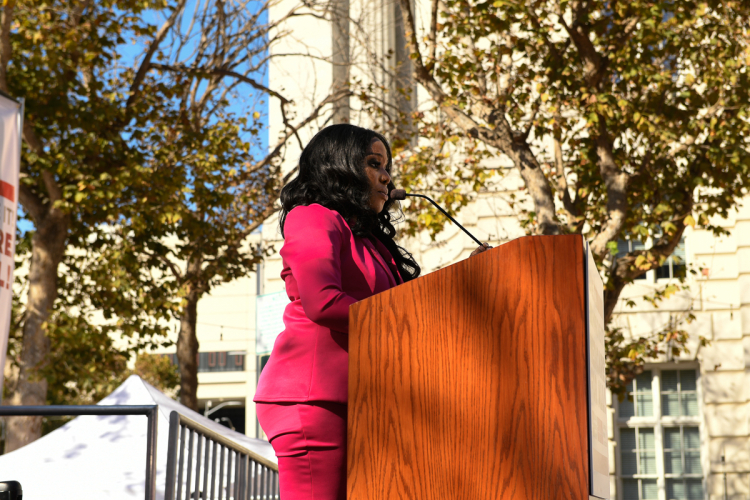 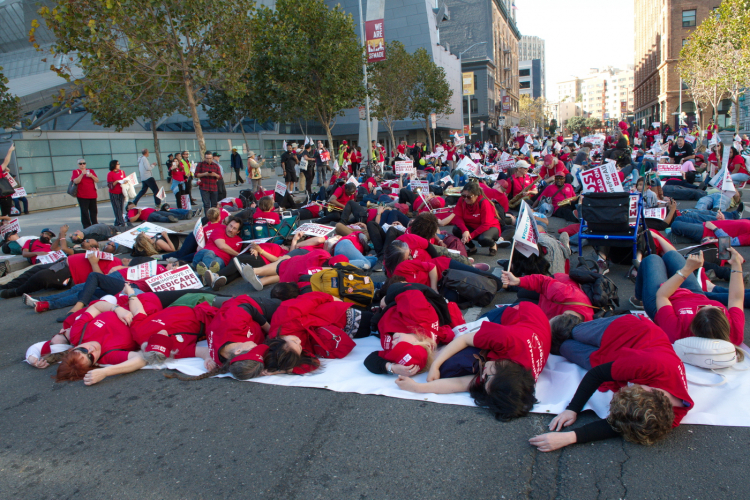 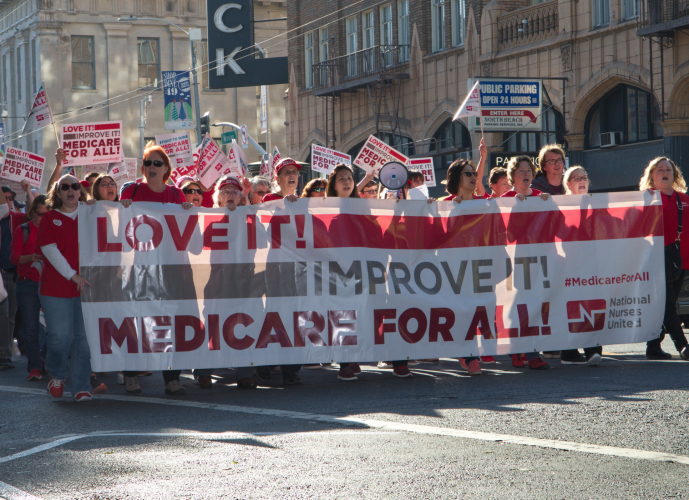 original image (1931x1400)
Add Your Comments
Support Independent Media
We are 100% volunteer and depend on your participation to sustain our efforts!