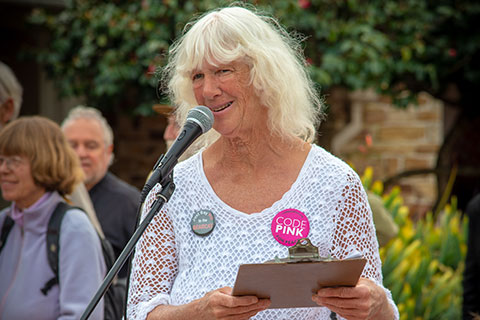 In shocking news to the Santa Cruz activist community, Sherry Conable passed away on February 4. Sherry participated in and organized countless political demonstrations and anti-war events over the course of decades in the Santa Cruz area. On March 8, a celebration of Sherry's life was held at Peace United Church, where family and friends wore the color pink to honor Sherry's work with CodePink.

Over her long career as an organizer and activist, Sherry managed the election campaigns of several Santa Cruz City Council members, campaigned for human rights and championed causes from AIDS education to nuclear nonproliferation to Earth Day. Her deepest passion was her work for and with Santa Cruz's homeless veterans, and in speaking out against war, police violence, and militarization of all kinds.

Chris Krohn writes: Sherry Conable was a community hero. We’ve lost a friend, a mother, an activist, a kibitzer, a local historian. Sherry was part of every peace effort going back to the NO NUKES Jackson Brown concert in the ’70’s. And as Paula Leroy wrote in an email recently, Sherry "organized dozens of rallies and events that helped us voice our views about war, militarization of the police (SCRAM), treatment of veterans, immigration, homelessness, and many more. She brought us together and made our voices and community stronger in beautiful ways In her glorious pink outfit with flowered wreath, she marched in Gay Pride, Women's March, Anti-Iraq and Afghanistan invasion rallies and every important cause for decades.”