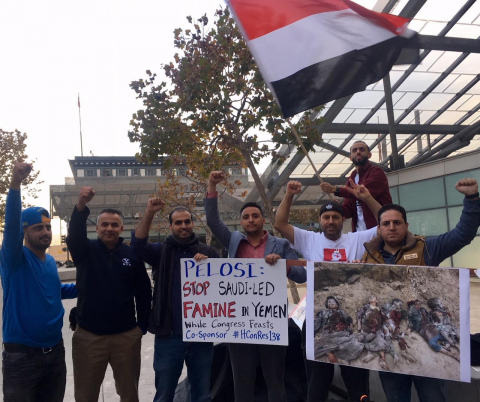 The war on Yemen has created the greatest humanitarian crisis in the world today. According to a United Nations estimate, 14 million Yemenis are at imminent risk of losing their lives to famine and disease; the total population of Yemen is about 28 million.

The US has been backing the Saudi-led war in Yemen providing mid-air refueling to Saudi Arabia and United Arab Emirates jets that conduct airstrikes. In addition, the US provides help with logistical and intelligence support. The bombing campaign supports a blockade that prevents food, medical supplies and clean water from reaching the people of Yemen. Bombs that strike Yemenis are made in the US and the Saudi-led coalition has killed over 50,000 Yemenis.

On November 20, San Francisco activists and members of the Yemeni community protested US involvement in the Saudi-led War on Yemen in front of the city’s Federal Building where Nancy Pelosi has an office. Their protest followed a similar action in San Francisco's Union Plaza earlier this month.

Speakers at the rallies urged Congresswoman Nancy Pelosi to support H Con Res 138, a measure that would end US support for the Saudi-led war in Yemen. While Pelosi condemned the Republican effort to quash the bill, it was only after protesters demonstrated that she agreed to be a co-sponsor. The measure was blocked largely by a Republican majority, but will likely see a vote again in January when Democrats are in control.

It's Thanksgiving and 14 Million Yemenis Face Famine While Congress Feasts |

Photos of Stop the War on Yemen Protest in San Francisco |

See Also: Will the New House Democrats Take on the War Lobby?