STOP the War in Yemen Protest 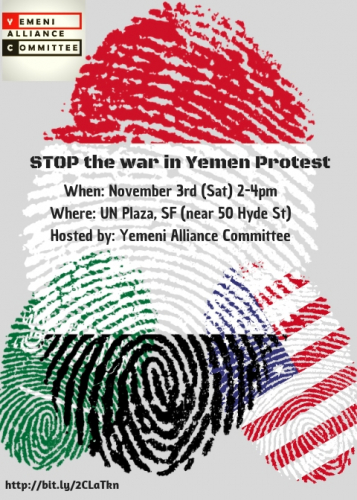 Join Yemeni Alliance Committee (YAC) and our partners on November 3rd (Saturday) from 2-4pm at the United Nations Plaza (closest to 50 Hyde St.) in SF to protest the ongoing US involvement in the war in #Yemen.

Since March of 2015 Saudi Arabia and its coalition, which includes the Arab countries of: UAE, KUWAIT, BAHRAIN, QATAR, SUDAN, EGYPT, JORDAN, MOROCCO, backed and supported by the US AND THE UK-have been bombing Yemen. It has not been a civil war since then. The United States has provided the Saudis with weapons and logistical and intelligence support and helped refuel coalition jets (mid air) as they drop bombs on Yemeni civilians.

The U.S.-backed Saudi-led campaign has killed over 50 thousand Yemenis, destroyed the country’s infrastructure, has led to widespread disease and sparked a famine thats become one of the worst in living memory.

On top of this the Saudi blockade has restricted humanitarian aide, medical supplies and clean water to Yemen. According to the UN, Yemen is the worlds worst humanitarian crisis in decades. The war in Yemen has left more than 22 million people—75 % of the population in dire need of aide.

By now, we all know what the Saudi de facto ruler Mohammad bin Salman and his regime are capable of, and its clear from the brutal murder of one of their own; when Washington Post journalist Jamal #Khashoogi was beheaded and dismembered earlier this month AND the atrocious attack on a school bus that killed at least 40 children by American-made bombs in August of this year-which is just a strike in a long string of attacks on the poorest nation in the Arab world. Only by Saudi Arabia could a crime like premeditated murder, or the mass killing of innocent Yemenis be called a mistake. Saudi warplanes target schools, hospitals and wedding halls in Yemen, and they shamelessly call such crimes "mistakes.

The Trump administration is allowing Saudi Arabia’s rivalry with Iran to dictate its policy in the region, and it comes at the cost of the innocent lives of Yemenis.

The only realistic check left is in Congress, where more voices are asking why the world’s most powerful country is helping to perpetuate the world’s worst humanitarian crisis. We've been complicit in this war, But Its time to take action, especially during election season.

WAYS YOU CAN HELP:

Contact your Representatives: ASK them to sponsor #HConRes138 to end U.S. support for the Saudi-led war in Yemen. CALL: 202-224-3121 or visit: https://callyourrep.co
Contact your Senators: ASK them to support #SJRES54, ending unauthorized U.S. military involvement in Yemen’s war. CALL: 202-224-3121 or visit: https://bit.ly/1ujDDoD
Take it to the streets, join a protest or organize one and use this hashtag: #YemenCantWait
Sign and share this petition by CREDO
Help YAC amplify next Saturday's action on social media (using #YemenCantWait): http://bit.ly/2CLaTkn

To join the list of event hosts and add your organization's name to this effort, complete this form: http://bit.ly/2yBTzvi

Contact yemenialliancecommittee [at] gmail.com for media/press inquiries or call 510-686-3047.

END_OF_DOCUMENT_TOKEN_TO_BE_REPLACED
Added to the calendar on Sun, Oct 28, 2018 8:16AM
Related Categories: San Francisco | Anti-War
Add Your Comments
Latest Comments
Listed below are the latest comments about this post.
These comments are submitted anonymously by website visitors.
TITLE
AUTHOR
DATE
Additional photos of Stop The War Protest
Leon Kunstenaar
Support Independent Media
We are 100% volunteer and depend on your participation to sustain our efforts!