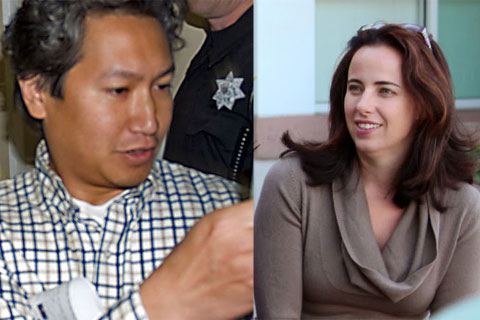 Peter Green writes: "Co-founders of Take Back Santa Cruz (TBSC) Analicia and Dexter Cube opened up for a candid, "on the fly" interview on September 12. Dexter answered questions about his past and his multiple brushes with the law, including being fined tens of thousands of dollars by the Securities and Exchange Commission (SEC) and losing his licence for defrauding his financial clients.

"He also discussed more minor brushes with the law, including his public urination bust when he was in college. Analicia Cube, the self-described President of TBSC, questioned the "mental balance" of Measure M rent control supporters in Santa Cruz, and was defiant that the Santa Mierda hate blog was separate from TBSC, even though it has been widely reported that Steve Schlicht (the communications director of TBSC) pens the blog."

Take Back Santa Cruz (TBSC) claims to be a non-profit group dedicated to safety issues in the city of Santa Cruz, and that they have no ideological direction. The truth is that TBSC has been the grassroots arm to many of the recent laws criminalizing homelessness in the city, as well as the force behind proposed RV bans, forced closure and relocation of a needle exchange service, and a stay away order law from public parks. In short, TBSC’s goal is to promote “tough on crime” policies. When asked who they are taking Santa Cruz back from, they reply “criminals”, and they encourage people not only to call the police when they see anything suspicious, but to sit in on court cases to show our judges that Santa Cruzans want tough sentencing.

Related Feature: Who Runs Take Back Santa Cruz and What Are They Up To?