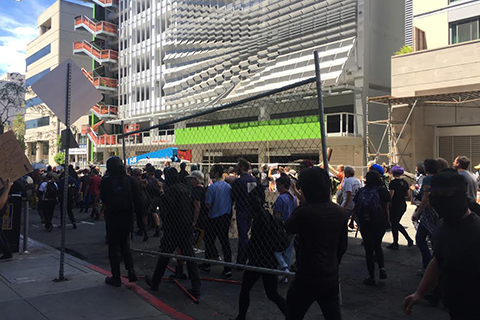 Prior to a white supremacist "No to Marxism" rally, a broad coalition of anti-fascist organizers declared: We will gather to maintain a Bay Area free of fascism and white supremacy, sweeping out those that seek to deport, cage, harm, or extinguish members of our communities. Attacks on immigrants, Black and Indigenous people and other people of color, Muslims, the un-housed, queer and trans folks, disabled people, and/or women are becoming more prevalent as fascism reasserts itself in governments, state agencies, and increasingly organized groups across the globe.

On August 5, 2018, upwards of a thousand people assembled in Berkeley to march on the planned white supremacist, fascist rally. During its attempt to reach the “alt-right” rally in Martin Luther King Civic Center Park, the march repeatedly encountered heavily defended police barricades that prevented them from entering the public park. Berkeley Police fired upon the crowd with a variety of projectiles. In response, the front of the march began to hurl their own variety of projectiles. Anti-fascists continued to march. Several City of Berkeley cars, a Marines recruiting center, and a bank had their windows smashed. Twenty people were arrested.

Cops And Klan Go Hand In Hand: An Urgent Report from the Berkeley Antifa Demo |

Sweep Out the Fascists: A Festival of Resilience |