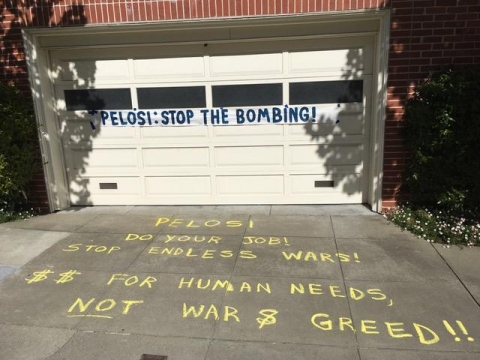 On April 13, the United States, together with its British and French allies, launched one hundred and five cruise missiles from sea and air striking three alleged chemical weapons facilities in Syria.  CodePink Women for Peace members rallied the very next day posting banners and chalking driveways in front of the Pacific Heights homes of Senator Dianne Feinstein and House Minority Leader Nancy Pelosi. Later in the afternoon of April 14, an emergency demonstration at Market and Powell in San Francisco demanded an end to the bombings.

CodePink members said that they targeted the private homes of Feinstein and Pelosi for protest because the U.S. disrupted neighborhoods and people in Syria and their goal was to bring the struggle to the political leaders' own neighborhood. Other anti-war protest organizers stated that the Pentagon and Trump administration are racing towards an expanded war in Syria, with strikes that violate international law, take countless lives, and boost Qaeda-affiliated armed groups that could lead to an even wider regional war.

On April 15 in Oakland, speakers at a previously scheduled protest to "end all wars at home and abroad" denounced the Trump administration ordered Syrian strikes. That demonstration started at Lake Merritt Amphitheater with a march that led to a rally at Oscar Grant Plaza amphitheater.

Emergency Response Protest Against US War on Syria! |

Sacramento Protest of US War in Syria-Emergency |

No to U.S. Wars at Home and Abroad!