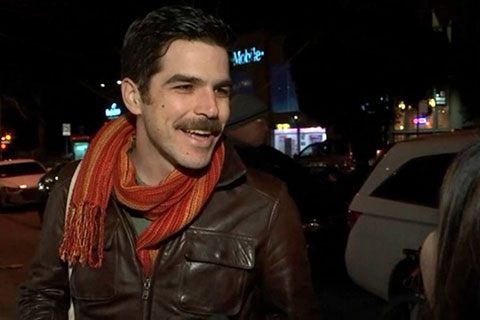 Chinga la Migra reports on an action against Francisco Cantú which took place on February 19 at Green Apple Books in San Francisco, and the cancellation of his event in Oakland the following day: After being shut down by comrades in Austin and forced to publicly admit he is against abolishing Border Patrol by comrades in New York, Cantú decided not to read from his book or discuss it as had been planned, and at the last minute, announced that he would only be signing books. A few minutes into the book signing a group of 12-15 of us walked past security guards hired by the bookstore for the event and disrupted it by reading prepared statements and handing out flyers, as well as free copies of No Wall They Can Build: A Guide to Borders & Migration Across North America.

It took us approximately 40 minutes to read 9 prepared statements. Most of the statements focused on the well-documented abuse of migrants by the U.S. Border Patrol and on known instances of collusion between Border Patrol agents and drug cartels. Statement #3, however, highlighted the 2002 murder of Tohono O’odham teenager Bennett Patricio Jr. by Border Patrol agent Cody Rouse and the characterization of Border Patrol as a “death squad” by Patricio’s Tohono O’odham family. Choosing to include only the thinly veiled account of the Border Patrol agent who killed Patricio in his memoir, Cantú misrepresents the teenager’s death as an uncontested accident, erasing years of struggle on the part of Patricio’s family to bring attention to the case and get justice for their son.