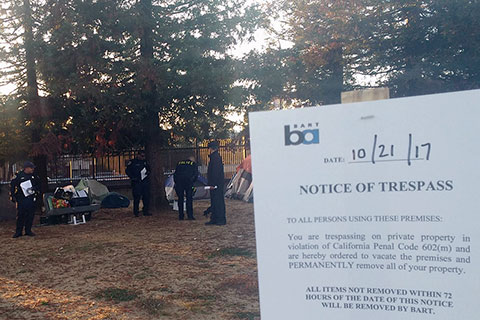 In an open letter to BART representatives, JP Massar declares: The BART police are about to commit a crime. They are about to evict some 25 homeless people from homes they have resided in for the last nine months.

For nine months a stable, peaceful, law-abiding community of homeless people has resided at the HERE/THERE space on the west side of the BART tracks just north of the Oakland/Berkeley border, across the street from Sweet Adeline. They have had the support of the neighborhood and have recently obtained, through community support, the ability to access a porta-potty and a handwashing station.

On Saturday afternoon [October 21]. BART police put up notices demanding that they remove themselves from HERE/THERE area within 72 hours and threatening to confiscate their possessions.

See Also: No One Wins if the Homeless are Evicted, Mr. Mayor!