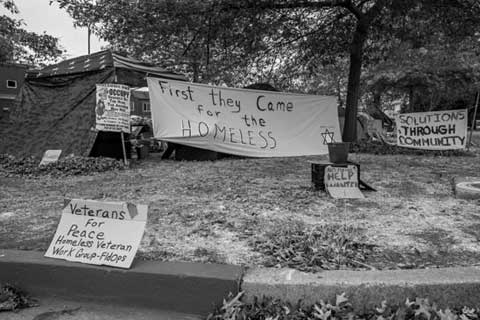 Stability First: A Community Of Tents and Tables, Chairs, Coffee and Camaraderie
First They Came for the Homeless Calls Attention to the Plight of the Homeless

Mike Zint & JP Massar write: What does it take to get off the streets? Money? Affordable housing? Employment? Of course the answer is yes, but none of those things is the first step. The first step is stability. Stability that the housed take for granted.

A lack of stability means the homeless barely survive. Figuring out how to exist with no sense of safety and security and nowhere to go, worrying about the police yet having committed no crime, takes all that someone has. Sometimes it’s too much and a short note appears in a local paper.

In October, 2016, First They Came for the Homeless (FTCftH), a political movement of the dispossessed in Berkeley, CA, tried to bring stability to their lives while at the same time calling attention to the plight of the homeless. Defying the status quo that forced them to sleep unsheltered and alone, they set up a community: tents and tables; chairs, coffee and camaraderie. A community of the homeless, with support from housed friends. Needless to say all hell broke loose.