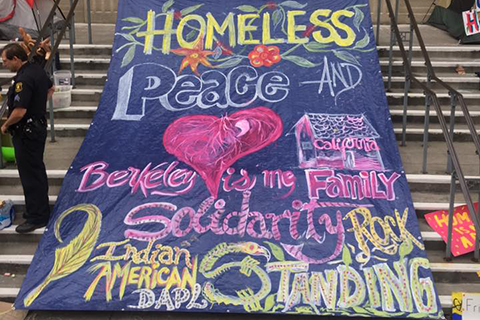 At 5:00am on November 4, the Berkeley Police Department violently raided an encampment of people living in tents at the corner of Fairview and Adeline Streets. The encampment served as a safe, clean and drug-free place for those seeking shelter from the rain and cold. Despite a declared Shelter Crisis in Berkeley, a fire-damaged emergency winter shelter, and a City Council-formed ad hoc committee to find a space that could be sanctioned for a homeless encampment, the Berkeley Police Department forced residents out of bed and into the streets, seizing their property and arresting four.

Among those arrested was District 2 City Council candidate and Anti Police-Terror Project member Nanci Armstrong-Temple. While the police were dragging away one woman who was pleading for her cane, Armstrong-Temple verbally intervened, demanding to know why they would not give the detained woman her cane. Without warning or cause, Armstrong-Temple was slammed to the ground by Berkeley police. She was arrested and faces two false charges: one charge of felony lynching and one charge of resisting arrest.

In response, a "Housing Not Handcuffs Sunrise Vigil" is scheduled for 6-10am on November 7 at Berkeley City Hall. In Oakland, from 8am-4pm the same day, a call has gone out to pack the Wiley Manuel courtroom in solidarity with arrestees Nanci Armstrong-Temple and Michelle Lot.

Rally for Human Dignity and Pack the Courthouse for Nanci