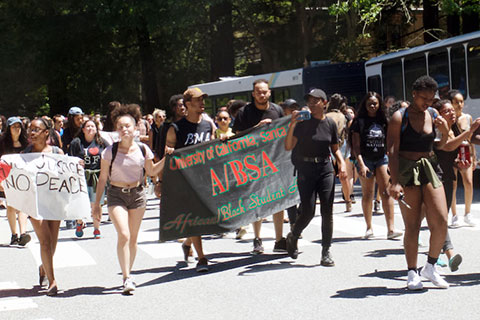 On May 2, hundreds of students rallied in Quarry Plaza at UC Santa Cruz to "let the Chancellor know Black Students need support from the University." Students then marched to Kerr Hall, the main administrative building at UCSC, and launched a reclamation of the building. Employees left the building, as students declared they will remain until the demands from Afrikan Black Student Alliance (A/BSA) are met.

A/BSA is one of the oldest and largest student organizations on the UCSC campus. Their demands, published on March 6 in City on a Hill Press and addressed to "Chancellor Blumenthal and any other involved party," begin by stating, "The Afrikan Black Caribbean identified students have spoken. The issues on this campus far exceed anything easily fixed. However Black students at UCSC have composed a list of uncompromisable demands that will make our time here more tolerable. These demands are not a huge ask, but they are pivotal to the retention of our community. If the university fails us, there will be no business as usual."

In a meeting on May 4, Chancellor George Blumenthal agreed to meet all four demands presented by A/BSA. Students stress that the struggle continues, and they have many upcoming meetings with UCSC representatives.

Photos | The Road To Reclamation