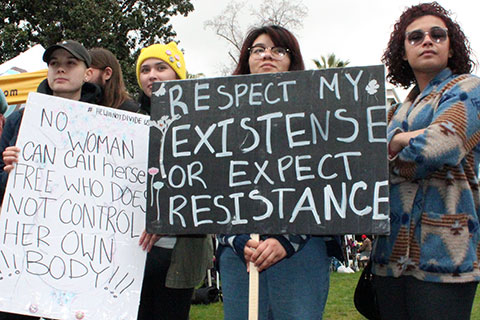 A diverse array of Sacramento community groups participated in ChangeFest, a climate mobilization rally at the state capitol on January 21 as part of a week of anti-Trump street protests in Sacramento centered around the Presidential Inauguration.

Speakers and musicians covered issues ranging from violence against women, to the Driscoll’s boycott in support of indigenous farmworkers in Mexico, to successful campaigns to ban fracking in San Benito and Monterey Counties, to the No DAPL struggle at Standing Rock, to the successful struggle by the City of Vallejo to stop oil trains from running through the city.

ChangeFest was part of the Trump Inauguration week protests held throughout the U.S. where local community groups held marches and protests of Trump and local issues that already exist and will likely become worse under his reign. ChangeFest took place concurrently with the Women's March from Southside Park to the Capitol, where over 20,000 people participated; a number of people spent time at both events.