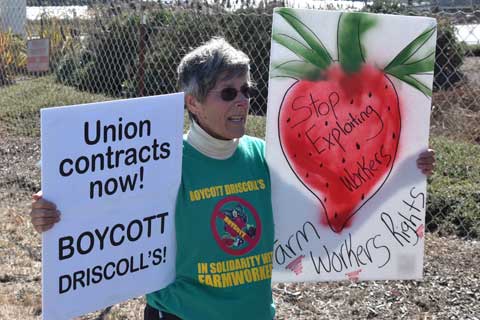 On October 15, about 40 people, including students from UC Santa Cruz, San Francisco State University, and Watsonville High School, as well as community members from Santa Cruz and Watsonville, came out to the Driscoll's Distribution Center and Berry Store in Aromas, California, to relay the message that the boycott of Driscoll's continues until Driscoll's negotiates a union contract with the farmworkers in San Quintín, Mexico who harvest the lucrative berries. Currently, farmworkers receive as little as $6 a day for 12-15 hours of work, with no benefits or job security.

In response to the protest, Driscoll's Berry Store closed early for the day. A Monterey County Sheriff's officer was parked at Driscoll's to inform people of the store's closure. Demonstrators lined both sides of San Juan Road with homemade signs and banners protesting Driscoll's for labor and human rights violations. People driving by in cars, trucks, and eighteen-wheelers honked and raised their fist in support of the protest.

Michael Gasser of the Santa Cruz Support Committee for the Driscoll’s Boycott held a sign stating, "#BoycottDriscollsContinues until there's a union contract with #SanQuintínSINDJA. No more slave wages and abuse." Community members from Watsonville displayed signs in Spanish requesting that "Driscoll's negotiate in good faith with the farmworkers of San Quintín" while also asserting that "The struggle of San Quintín is present."