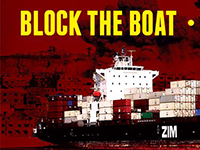 UPDATE 10/27: After successful blockades of Zim Line ships at the Port of Oakland in August and September, a third blockade was set to target the Zim ship Beijing before dawn on Saturday, October 25. The Beijing was rescheduled to dock the morning of Sunday, October 26, and then delayed indefinitely. Organizers — remaining vigilant for a potential docking at any time during the week — called for a solidarity march from West Oakland BART station on the afternoon of Sunday 26th, as a show of force to let Zim know that activists would be ready should the Beijing attempt to unload cargo in Oakland. The Beijing never docked at the port of Oakland and instead headed for other ports..

In announcing the action, organizers wrote: Palestinians are unified in their call to people around the world to take action against Israel everywhere. Bay Area residents have the opportunity to up the ante and be leaders in the movement for justice in Palestine! We salute the longshoremen who stood with the Palestinian people by honoring our Block the Boat picket and refusing to unload Zim in August, and for doing so again during another successful picket in September. We will be asking workers to once again join with us in sending a message to the world that Zionism is not welcome at the Port of Oakland.

See Also: Zionist Organization of America head calls for arrest of Block the Boat protesters | California Leads the Way in the “Block the Boat” Movement