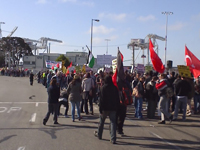 Unions, labor federations and other organizations around the world have condemned Israel’s deadly attack against the Gaza Freedom Flotilla on May 31. Nine people were killed and dozens seriously injured in the Israeli commando attack in international waters on ships attempting to bring humanitarian cargo to the suffering and blockaded people of Gaza. Six people aboard the ships are still missing and presumed dead.

In response on June 20th, a labor and community picket of an Israeli Zim Lines ship was called for the Port of Oakland. In San Francisco in 1984, a picket line and refusal to unload cargo of a ship carrying South African cargo was a key event in mobilizing the anti-apartheid movement worldwide. The Oakland picket has already succeeded in shutting down the port for the morning shift, after the ILWU refused to cross the picket line. Activists have promised to return at 4:30pm the same day to stop the next shift from unloading the Zim lines ship when it arrives from Monterey this afternoon.