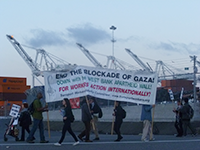 Oakland Does It Again with Successful BDS Blockade at Port
For Second Time in Two Months, Zim Ship Forced to Leave Oakland Port Without Unloading

Boycott, Divest, and Sanction (BDS) activists in the San Francisco Bay Area came together again on September 27 and 28 to picket and blockade an Israeli Zim Line ship at the Port of Oakland. Organized by the Stop Zim Action Committee this time, Palestine solidarity activists dispersed across five entrances at the SSA terminal over multiple shifts, preventing longshore workers from unloading cargo for two days until the ship left port.

ILWU Local 10 longshore workers refused to work the Israeli Zim ship Shanghai during the picket. The ILWU Local 10 has been out of contract since July, which means workers will not get paid if they do not work a shift, regardless whether there is a picket line or a health and safety concern. But it also means union members do not have to defer to the port authority to determine whether or not they do cross a picket line. The ILWU has a long history of lending its union power in solidarity to outside causes.

Zim Integrated Shipping Services is Israel’s largest cargo shipping company and has become an increasingly popular target for BDS activists. In August, a Zim Line ship was effectively blocked in Oakland for four days, the longest blockade of its kind to date, kicking off similar actions up and down the West Coast. Oakland's Block the Boat coalition has called for yet another picket at the port on October 25.

Sustained Picket of Zim Ship in Oakland - End the Siege of Gaza: 1, 2 |

Zim Blockade Continues - All Out to the Picket Line! | Anti-Apartheid Group Announces Campaign to Block Zim Ships to Oakland