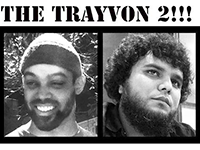 Hannibal Abdul Shakur and Tanzeen Doha were arrested during protests during the summer of 2013 in downtown Oakland, after the George Zimmerman verdict was announced, where he was acquitted for the February 26, 2012, murder of Trayvon Martin. At an October 10 pre-trial readiness conference, the Oakland prosecutor finally admitted that they had “insufficient evidence” to go to trial, putting forth a motion to drop the remaining charges. Workers World interviewed Hannibal Shakur about their legal and political victory.

WW: I witnessed the pre-trial hearing last spring for you and Tanzeen, when they were still pressing the felony charges, and from the witnesses your lawyer, Walter Riley, presented, it was obvious that the DA had no case then. The charges were dropped from felonies to misdemeanors by the judge over the prosecutor’s objection, but he insisted on pursuing the charges at that time. Why do you believe he did, despite the clear lack of evidence?

HS: There’s been a lot of pressure on the DA to clamp down on protesters. They’re looking for a scapegoat to make them think organizing marches isn’t worth it. One of the discouragements for corporations to invest in developing these areas is there’s such a history of protests here. It represents an uncertain financial future for corporations who want to come in and advance capitalism.

Hands off the Trayvon 2! Courtroom Solidarity |