by Terri Kay, Workers World
Despite overwhelming evidence of the defendants’ innocence in what is being called the “Trayvon 2” case, the judge in their pre-trial hearing here ruled on March 6 to continue the case to trial. However, he lowered the charges on the two well-known activists, Hannibal Shakur and Tanzeen Doha, from felonies to misdemeanors over the prosecutor’s objections. 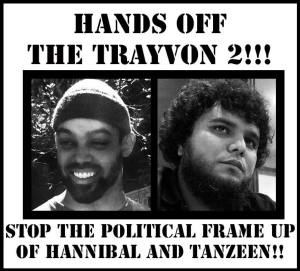 Oakland, Calif. — Despite overwhelming evidence of the defendants’ innocence in what is being called the “Trayvon 2” case, the judge in their pre-trial hearing here ruled on March 6 to continue the case to trial. However, he lowered the charges on the two well-known activists, Hannibal Shakur and Tanzeen Doha, from felonies to misdemeanors over the prosecutor’s objections.

Supporters once again packed the courtroom to support the two, who were among many arrested during massive protests after a Florida court acquitted George Zimmerman in the killing of Trayvon Martin. Shakur and Doha — both young men of color and Muslims — are the only ones still facing charges.

The hearing, which lasted most of the day, was scheduled for the Wiley Manuel Courthouse in downtown Oakland. After supporters flooded the courtroom, the judge announced an immediate move to the Rene C. Davidson Courthouse a mile away. Supporters spontaneously decided to march to the new location.

Two Oakland police officers gave somewhat conflicting testimony in which each of them claimed to have seen a different one of the two defendants break a plate glass window. They each claimed to have never lost sight of the person they saw break the window before arresting him. One of the two, who was watching from 65 feet away, said there were 200 people in the crowd of protesters. The other estimated the same crowd at 50 to 100 people and said he was 40 feet away.

The officer who arrested Hannibal Shakur said Shakur was wearing a hoodie and a scarf over his face. Defense attorney Walter Riley was quick to point out that this had been a “Hoodies Up” march for Trayvon and most of the crowd could have been described that way.Questioned about the lapel camera he is required to activate, the officer claimed he hadn’t activated it until after he grabbed Shakur. He then changed his earlier testimony to claim he was only 30 feet away from the crowd.

The sole witness for the defense managed to single-handedly discredit the testimony of both the officers. He described how he had seen a woman break a bank window blocks away. He followed her on his bike and watched her break another window at the Men’s Wearhouse store, which the Trayvon 2 are accused of vandalizing. He said he saw a second woman come up and take a second whack at the same window. The witness was standing at a much closer vantage point than the police, only feet from the window. He insisted that only one window was broken, while the combined testimony of the two officers implied that each defendant had broken a different window at the store. The judge verified, from the store’s invoice, that only one window pane had been replaced.

Despite the prosecutor’s repeated attempts to discredit the defense witness, claiming his testimony was biased, even the judge had to finally point out that if the witness was biased, he was clearly biased on the side of the city and the property owner. He had clearly stated that he was following the demonstration for the sole purpose of either preventing or bearing witness to property damage. A transcript of his tweets from that evening was submitted as evidence, documenting his story to the minute.

Supporters are asked to pack the courtroom again for the trial at 8 a.m. on March 19 in the Wiley Manuel Courthouse, Department 104, on 7th and Washington streets in Oakland. The Trayvon 2 could each face a year in jail if found guilty, even on misdemeanor charges.
END_OF_DOCUMENT_TOKEN_TO_BE_REPLACED
Add Your Comments
Support Independent Media
We are 100% volunteer and depend on your participation to sustain our efforts!