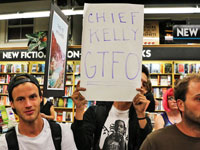 To send a strong message that "killer cops" are not welcome in Santa Cruz, community members gathered on August 26 to protest a speaking engagement at Bookshop Santa Cruz featuring Salinas Police Chief Kelly McMillin. "We are creating a public presence to say loud and clear that the Salinas police chief who oversaw the killings of four Latino men in four months is not welcome in our community," read a flyer provided by Sin Barras, the Santa Cruz-based organization that called for the demonstration.

Between March and July of this year, four individuals have been killed by officers with the Salinas Police Department. Outside of the book shop, which is located in downtown Santa Cruz, one demonstrator held a sign that declared, "Salinas: Our Ferguson." Several dozen individuals attended the protest, with some traveling from Salinas and other areas in Monterey County to make their voices heard. Organizers say they did not intend to disrupt the speaking event.

"We believe it is anti-thetical and extremely disrespectful to give Chief McMillan such a privileged voice in a space that is uncritical of his policies and the racist murders he has overseen," the literature from Sin Barras stated. The group also stated it sought to, "expose the brutality and racism of the Salinas cops and media." McMillin was invited to speak at Bookshop Santa Cruz by Monterey Herald reporter Julia Reynolds as part of a signing event for her book "Blood in the Fields." According to the shop's website, the book documents the history of Operation Black Widow, "the FBI's questionable decade-long effort to dismantle Nuestra Familia [a criminal organization], along with its compromised informants and the turf wars it created with local law enforcement agencies."