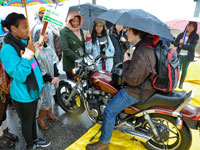 Students and workers at UC Santa Cruz blocked both entrances and shut the campus down in support of a University of California-wide unfair labor practices strike on November 20, called for by AFSCME 3299. The strike was called in response to a, "coordinated campaign of illegal intimidation, coercion, and threats," against UC Patient Care and Service Workers who participated in a walk out in May over unsafe staffing levels at UC supported hospitals.

Those living in on campus family housing were allowed to enter the university during the strike. Emergency vehicles were also allowed to enter, but unlike previous campus shutdowns, the police were prevented from driving through, and according to demonstrators were turned away at least once. After a 12+ hour blockade in the rain, those blocking the west entrance marched down High Street to the base of campus for a final rally.

Why We Strike: UC Lied to You | See Also: AFSCME 3299 Announces Nov 20 ULP Strike at University of California