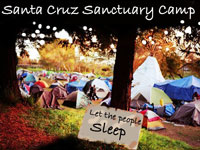 Organizers with Santa Cruz Sanctuary Camp released the first draft of their proposal, and the group hopes to establish a 25–50 person pilot camp as a safe space for homeless people to sleep before the onset of winter this year. Requiring ¼-½ acre to begin with, activists stated, "We aim to start strong and small to demonstrate effectiveness and efficiency." According to the Santa Cruz Sanctuary Camp proposal, recent counts show there are at least 3000 homeless people in Santa Cruz.

During weekly Sanctuary Camp meetings, county and city maps have been examined, as well as Google Maps, to find potential open spaces that might be suitable. Camp organizers hope to find a portion of land that is away from "close proximity to population or business centers," yet within easy foot or bike access to these, and with county bus access also. Organizers say one expectation is to be offered land for use from one of the following categories of landowners: city, county, state, university, church, or private. They hope to operate the camp initially as a non-profit, but the proposal states that after a period of time it may be appropriate to seek funds, beyond grants, taken directly from local governments.

Planning meetings for Santa Cruz Sanctuary Camp are held every 1st & 3rd Wednesdays at 6pm at the Resource Center for Nonviolence on 612 Ocean Street in Santa Cruz.