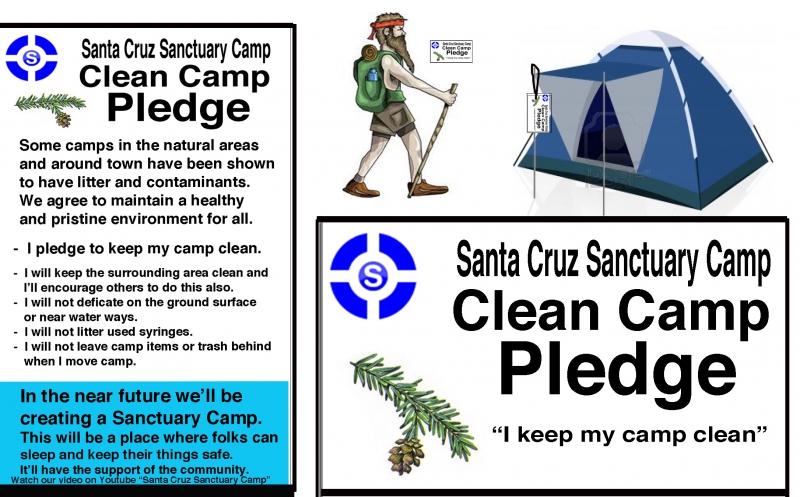 original image (2172x1350)
Over the past several years we've been disheartened about the general situation of homelessness in Santa Cruz.
We've seen the endless chain reaction of homeless encampment discoveries and subsequent camp sweeps almost as if city and county law enforcement and officials have difficulty accepting the reality that homeless people exist.

For the approx. 1,500 people who have been counted as sleeping outside, there is no legal place for these folks to sleep. Lets never forget that it is illegal to sleep outside after 11pm.

One of the biggest factors that triggers these camp sweeps is evidence of some identifiable trash filled camp areas or found syringes. We agree that garbage in natural areas is a problem but we assert that it is difficult for officials to expect clean areas if there are no trash receptacles, porta-potties or syringe refuse containers in these areas.

We've decided to take a pro-active approach from within the population of campers by beginning to issue "Clean Camp Pledge" cards. On the back of these cards is a short list of agreements (the word "defecation" is misspelled but has been corrected on the actual card). We are visiting local food lines, shelters and HSC and where ever houseless folks congregate to ask folks to verbalize their agreement for acceptance of one of these cards.

Santa Cruz Sanctuary Camp is planning to establish a community supported homeless tent camp.
The days when homeless people are the targets of scorn are numbered.
We are destroying what it means to be homeless.

Please watch the video in in the internet link listed here.
http://www.youtube.com/watch?v=tBWhgjXrKaY
Add Your Comments
LATEST COMMENTS ABOUT THIS ARTICLE
Listed below are the latest comments about this post.
These comments are submitted anonymously by website visitors.