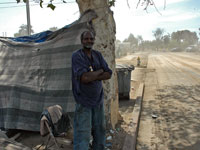 War On the Poor in Fresno: Downtown Homeless Encampments Destroyed
After Displacing Hundreds of People, More Encampments to Be Evicted by City

After two days of destroying property, the City of Fresno completely dismantled and removed the homeless from several of the largest encampments in downtown Fresno on August 27. Much of the homeless people’s property was put in roll-off dumpsters by city workers where they say it can be "reclaimed."

On Tuesday,September 3, the City of Fresno will begin again, this time destroying the encampment across Golden State Blvd, west of E street, between California and San Benito. There are at least 100 people living at that encampment, probably more because of all of the new arrivals. Help Fresno's Homeless is a new homeless advocate group that is attempting to stop these ongoing attacks against the unhoused.

Found: A homeless encampment that the City of Fresno does not intend to destroy | Help Fresno's Homeless

Who is burning down the Fresno Homeless Encampments? |