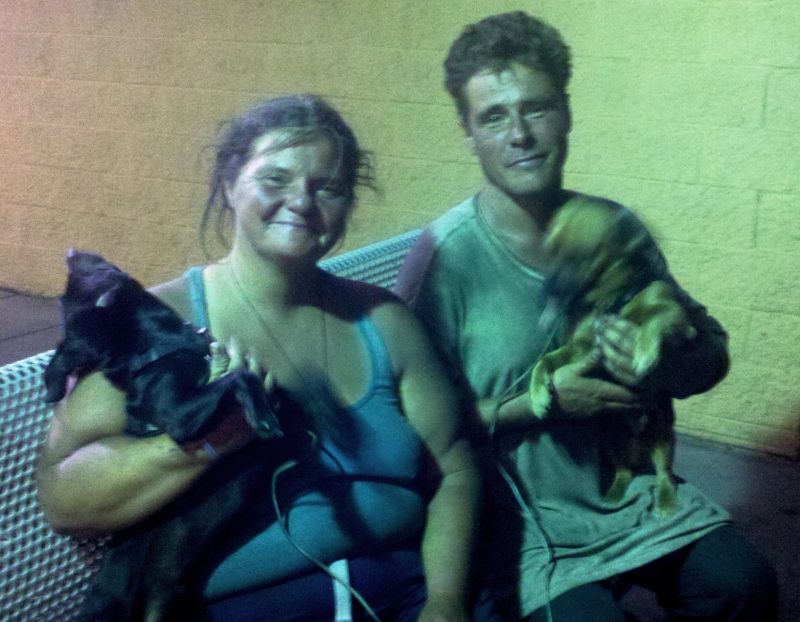 original image (2365x1840)
In the next couple of weeks, homeless people who live in downtown Fresno will be forced from their shelters and told to move on. The driving force of this relocation is the Poverello House, which is a homeless service center located at Santa Clara and F streets.

Poverello House staff have been complaining for some time now about the homeless encampments that have developed outside their gates. They claim these encampments are a magnet for crime and violence, which makes it more difficult for their clients to walk through a gauntlet to get to their facility. Adding credibility to their claim were several shootings in July, with one person killed and another paralyzed.

At about the same time as the late August demolitions at the homeless encampments take place, the Poverello House will be closing some or all of the Village of Hope, which are tool sheds where more than 100 people live. The combination of this closure and the eviction of the homeless people living near the Poverello House will create a massive dislocation, with no solution in sight.

The City of Fresno has focused on developing partnerships with groups providing housing for a limited number of homeless people. The three Renaissance projects are an example of this effort, but they house only 118 of the estimated 15,000 homeless people in Fresno. There are no construction projects for new homeless housing currently planned.

There has been renewed talk of housing vouchers being distributed, with the likely number being well under 100. There are more than 1,000 homeless people in downtown Fresno, and there is no safe and legal place for them to live. They have put up shelters around the Poverello House because that is where they can get free meals and services. The Rescue Mission, which has beds for homeless men (only), does not allow anyone to use them unless they are in a rehabilitation program.

The problem with drugs and violence in the homeless encampments is real and has been exacerbated by the Fresno Police Department’s hands-off approach. Most of the homeless people don’t feel protected by the police, and the police have, until recently, not made servicing the area a high priority. I have seen open drug sales taking place on street corners, domestic violence takes place regularly and, in many respects, gangs fill in the void and are the law of the land.

At least that was true until mid-July when the police made a concerted effort to take back control of Santa Clara and F streets with a massive presence. One homeless resident told me, “They are driving through here every five minutes.” Another man told me that he was put on the curb and illegally searched.

A homeless woman said, “They came into my shelter and asked me what I was doing there.” She said she was “trying to survive without people breaking into my house.”

The all-or-nothing police response at the homeless encampments leaves you wondering why they have abandoned them or alternatively that they are overreacting, possibly violating people’s constitutional rights.

When the evictions from the Village of Hope and new demolitions of the homeless encampments near the Poverello House take place, people will be forced to find new places to live. Of course, the locations where homeless people establish new encampments will create situations that lead to the next round of evictions. Some homeless advocates have compared this cycle to a cruel version of Whack a Mole.

Here is what happens when the homeless are forced out of downtown Fresno.

William Lewis and his friend Lori Bryson are homeless and live in the Herndon and Blackstone area. Lewis called the Community Alliance to complain of police harassment, saying they had been arrested and taken downtown, for allegedly “blocking a sidewalk and trespassing.” Lewis told me that the officer who threatened him with arrest issued a citation and took him and Lori to the downtown police department for processing.

“Officer Lee threatened to take our two dogs from us if he sees us anywhere north of the Poverello House,” Lewis said. He claims Officer Lee told him “that if I’m north of the Poverello House and see him coming for Lori and I to empty our pockets, put our hands behind our backs and to consider ourselves under arrest.” Lewis says he is having a hard time sleeping from all the stress.

Another example of the problems encountered when homeless people are forced out of downtown and end up in other parts of the city is what happened on July 17, when an encampment emerged on a ditch bank near Ashlan and West avenues in northwest Fresno. When I arrived, the Fresno Irrigation District (FID) was in the middle of destroying the encampment and everybody’s property.

Most of the structures had already been pulled out of the protective shrubbery on the southwest side of the canal bank. A bulldozer was busy picking up homeless people’s property and putting it in a dump truck.

I asked Murray, who said he was a supervisor for the FID, if they were saving any of the property. He said they had not found anything of value yet, but I think my question got him thinking about the implications of their actions. Murray said that they had put up notices informing the homeless people that they were going to “clean up.” I asked for a copy of the notice, and he said he didn’t have one.

Someone (probably Murray) must have convinced the crew that they better make a show for the press because then they started going through the shopping carts and putting things aside, which they said they were going to save.

The FID frequently destroys homeless encampments. It is rare when someone photographs them in the act. The Community Alliance has filed a California Public Records Act request to see if the FID actually did store any property and to find out how the homeless can reclaim whatever was lost. Sometimes the items destroyed or saved include clothes, ID, photographs of loved ones and other valuable items.

The kind of reckless behavior being displayed by the FID is what has the City of Fresno facing multiple lawsuits from their October–November 2011 destruction of homeless encampments. The wheels of justice are turning slowly in that case, which will eventually end up in Federal Court. Right now, both sides are still in the discovery phase of court proceedings, interviewing witnesses, etc. The fact that 30-plus homeless people have sued the City of Fresno for violating their rights has curbed City Hall’s enthusiasm for taking a more aggressive approach against the homeless.

One way this manifests itself is by providing minimal police and other services. For months, the city did not provide any trash service. It still refuses to provide drinking water or portable toilets. As a concession to residents of West Fresno who complained about the health and safety implications of large piles of trash on the streets, the city now cleans up once every three weeks.

The City of Fresno’s policy of chasing the homeless from one location to another is not going to end homelessness. It is not going to improve homeless people’s lives and does not move us one step closer to a solution. What would help is if the community started to establish safe and legal places where the homeless could live. These facilities would have basic public services and the people living in them would be treated with the same dignity and respect that everyone deserves.

If you would like to do something concrete to help the homeless in Fresno, you can drop off rolls of toilet paper at the Fresno Center for Nonviolence (1584 N. Van Ness Ave.) Monday–Friday 11 a.m.–3 p.m. You can also mail a contribution to help pay for the portable toilets and trash bins to the Community Alliance, P.O. Box 5077, Fresno, CA 93755 (make the check to “Eco-Village Project”). All of the contributions are used to help the homeless; nothing is used to pay for administrative or other overhead expenses.
###
The Fresno Bee printed a front page article, in the Tuesday, July 30 2013 edition, about the demolitions of downtown homeless encampments. See: http://www.fresnobee.com/2013/07/29/3413693/three-big-homeless-camps-in-fresno.html

*****
Mike Rhodes is the editor of the Community Alliance newspaper. Contact him at editor [at] fresnoalliance.com.

END_OF_DOCUMENT_TOKEN_TO_BE_REPLACED
Add Your Comments
Latest Comments
Listed below are the latest comments about this post.
These comments are submitted anonymously by website visitors.
TITLE
AUTHOR
DATE
Homeless people are disadvantaged enough without being demonized
Linda Johnson
Channel 30 reporter
Dan
Pretty bold with their tales. Amazing how some people lap things up.
kelly
The task force
Dan Waterhouse
Fresno Police establish new Homeless Task Force
Mike Rhodes
If you believe everything The Fresno Bee and City Hall says. . .
Mike Rhodes
Response to Dan's most recent comment
Mike Rhodes
I Believe...
Dan
Mike Rhodes on the Air Thursday on Free Radio Santa Cruz
Robert Norse
Responding to Dan
Mike Rhodes
Support Independent Media
We are 100% volunteer and depend on your participation to sustain our efforts!