Found: A homeless encampment that the City of Fresno does not intend to destroy

by Mike Rhodes (editor [at] fresnoalliance.com)
During a tour of homeless encampments today, I found a couple of fans of the alternative/independent Community Alliance newspaper (see photo below). 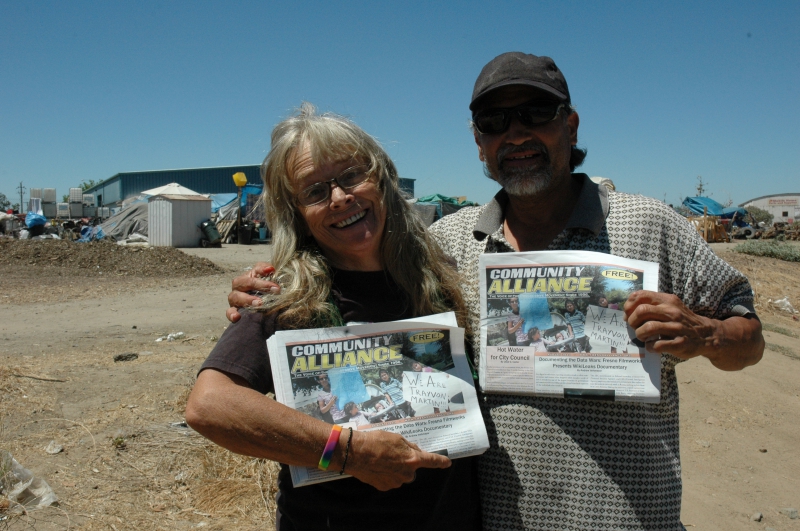 original image (3008x2000)
The photo of the couple above is at a homeless encampment near Palm and H street, behind the tall Grain Silos. What I found interesting is that the City of Fresno has not posted this encampment for demolition. All of the other downtown encampments will be demolished in late August and early September, but this one will not be destroyed.

My theory is that the Poverello House (a large homeless center in downtown Fresno) is the moving force behind having all of the homeless encampments destroyed. They claim that the homeless encampments are interfering with the ability of their clients to access their facility. Of course, the homeless live there because they want to access these services. . . Representatives from the Poverello House say that these encampments are dangerous and that crime takes place in them. Of course, that could be said of lots of places in Fresno, but nobody is suggesting bulldozing River Park because of a crime that was committed at that shopping center.

In any event the Poverello House has demanded that the city remove the encampments. The city is all too eager to participate in this latest attack on the homeless. See https://www.indybay.org/newsitems/2013/07/30/18740629.php for the details.

The encampment near the Grain Silo is the only large encampment that is not located near the Poverello House.

Mike Rhodes
Editor
Community Alliance newspaper
Add Your Comments
Support Independent Media
We are 100% volunteer and depend on your participation to sustain our efforts!