by Mike Rhodes (editor [at] fresnoalliance.com)
Day two of the War on the Poor in Fresno. Photo below: I found this woman standing on Santa Clara street as the City of Fresno was finishing the destruction of this homeless encampment. The dirt and dust that was everywhere was as amazing as her smile. 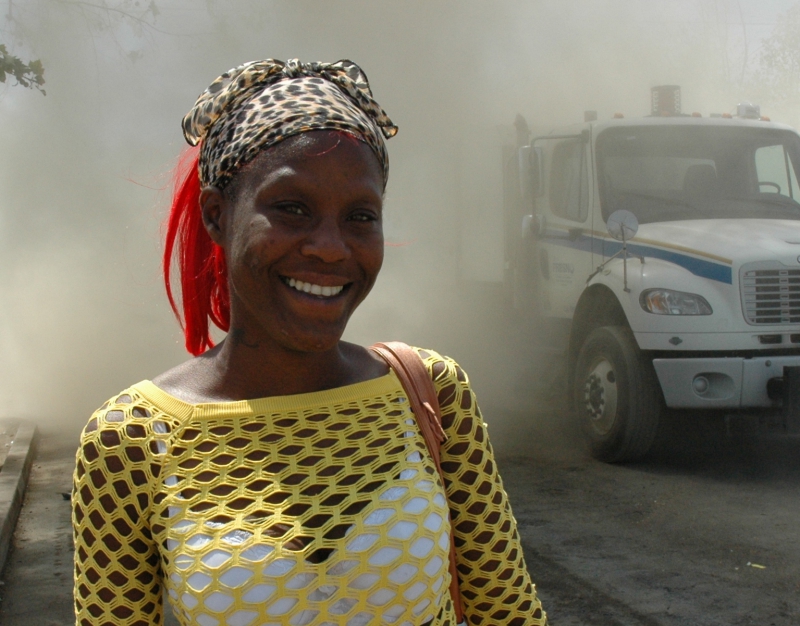 original image (1535x1202)
It took the City of Fresno two days to completely dismantle and remove the homeless from several of the largest encampment in downtown Fresno. By the middle of the afternoon, city crews were clearing out a few remaining items left behind, cleaning the streets, and talking about how well everything had gone. There was no significant resistance by the homeless and all of the structures have been removed.

The last shelter standing was the one Mississippi was standing next to when I arrived at about 1:30 p.m. Mississippi seemed a little perplexed as to why they had not removed his structure on Santa Clara (between E and F street), but he was not complaining. We took a few photos of him outside the shelter and talked about him being the last holdout.

When I returned 45 minutes later, Mississippi was sitting in a chair where his shelter used to be. He said one of the undercover officers (there are a lot of them out there these days) drove by, opened his window, and said “What makes you think your so special?” I guess the officer did not like Mississippi’s answer, because immediately after that conversation, workers from the sanitation department arrived, cut the tarp from the fence, threw everything into the street, a bulldozer picked it up and put the remains of his shelter in the back of a garbage truck.

Next Tuesday, September 3 the City of Fresno will begin again, this time destroying the encampment across Golden State blvd, west of E street, between California and San Benito. There are at least 100 people living at that encampment, probably more because of all of the new arrivals.

There is a new homeless advocate group that has organized and is attempting to stop these ongoing attacks against the homeless. For more information about what they are doing - they have a meeting this Thursday, are circulating a petition, plan to attend this weeks City Council meeting, and much more, go to: http://www.helpfresnoshomeless.org/
END_OF_DOCUMENT_TOKEN_TO_BE_REPLACED
§Mississippi - the Last Man Standing
by Mike Rhodes 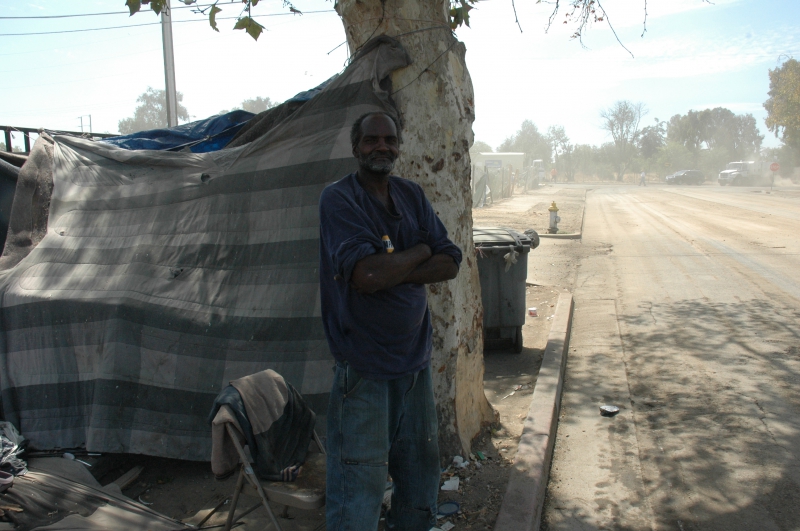 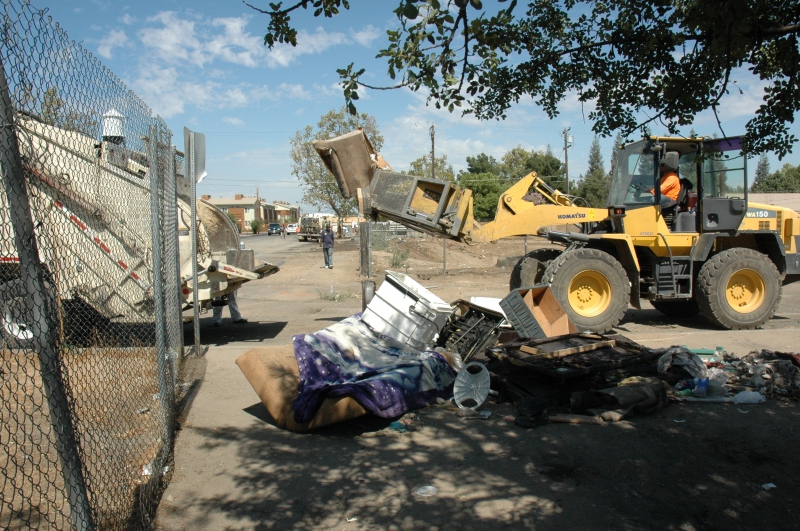 original image (3008x2000)
At E street and the Golden State Blvd off ramp, a city crew was destroying property (couches, chairs, etc) on Tuesday afternoon. Items being destroyed included a couch, chairs, and other items that seemed to me had some value. When they started chopping down the tree where the homeless used to sit under, I just had to leave.
END_OF_DOCUMENT_TOKEN_TO_BE_REPLACED
§F street
by Mike Rhodes 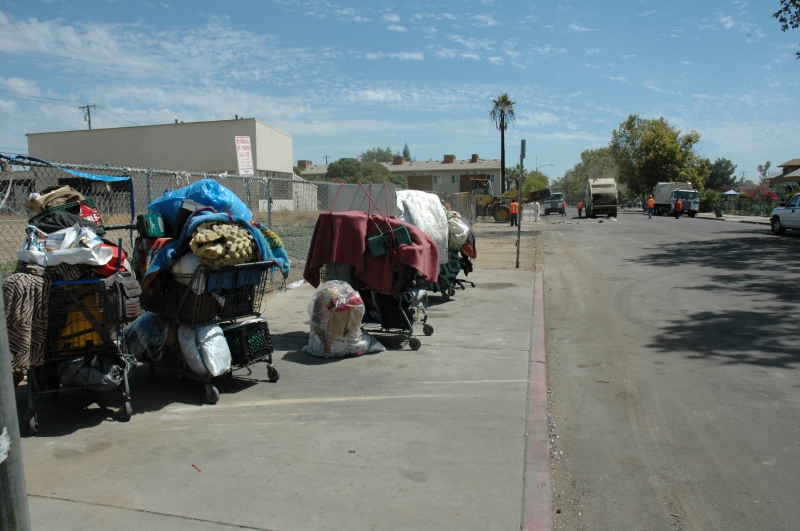 original image (3008x2000)
This shows what F street (south of Ventura) looked like this afternoon.
END_OF_DOCUMENT_TOKEN_TO_BE_REPLACED
§Putting Homeless People’s Property in a Roll off Dumpster
by Mike Rhodes 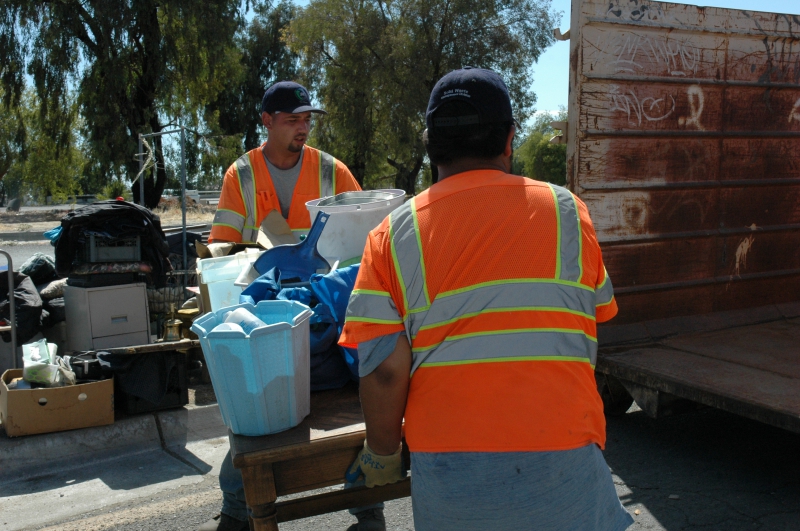 original image (3008x2000)
A lot of homeless people’s property was put, by City of Fresno workers, in roll off dumpsters where they say it can be reclaimed for up to 90 days.
END_OF_DOCUMENT_TOKEN_TO_BE_REPLACED
Add Your Comments
Latest Comments
Listed below are the latest comments about this post.
These comments are submitted anonymously by website visitors.
TITLE
AUTHOR
DATE
Henry Perea and Tower
Dan Waterhouse
Henry Perea's
Dan Waterhouse
Amazed that People Maintain Their Dignity
Displaced Fresnan
Support Independent Media
We are 100% volunteer and depend on your participation to sustain our efforts!