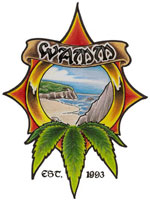 Valerie Leveroni Corral writes: "10 years ago at the break of dawn, awakened by the stomp of heavy booted agents, WAMM was raided by 30 DEA agents. Mike and I were taken into custody; chainsaw wielding agents cut the entire garden down, WAMM members blocked the gate, locking agents behind, and WAMM members and supporters bargaining for our release. What followed changed the course of medical marijuana, circumventing the government’s strategy to eliminate patient service organizations, legal under California state law. Santa Cruz City and County enjoined WAMM members in a lawsuit that resulted in a settlement, allowing WAMM to continue our service as the only collective sanctioned by the federal government. With deep gratitude, I thank our attorneys who labored diligently for patient rights to access medicine and for our freedom.

"To this day we serve patient needs engaging a social model of patient care through building community. As a patient based organization, we respond to need by caring for each other from within what might otherwise be a marginalized population. We provide space for members, grow all of our organic medicine, and make all of our products. Instead we are mighty, even providing care for our members as they face death."