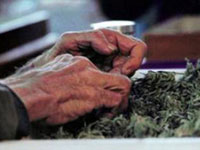 The world premiere screening of La Vie en Verte: The WAMM Movie will take place on Wednesday, May 12th, 6:30pm at the Riverfront Theater, as part of the Santa Cruz Film Festival. La Vie en Verte documents the Wo/Men's Alliance for Medical Marijuana (WAMM), a "collective of patients and caregivers [who have been] providing hope, building community and offering medical marijuana on a donation basis” for over a decade. In the film, we meet Valerie and Mike Corral, and follow their journey as they dedicate their lives to offering compassionate care despite the antagonism of the brutal federal government.

Arrested in 1992 for using marijuana to alleviate symptoms resulting from a devastating car accident, Val later won a major legal victory, a first for the medically necessary use of marijuana. She began offering small amounts of it locally to folks who benefitted from its healing properties. This ultimately evolved into the formation of WAMM with her husband, Mike. When their garden was violently raided by the DEA in 2002, the community rallied, marching downtown and staging rallies on the steps of City Hall. WAMM has since transitioned and now offers support and resources for patients to grow their own medicine – and is still an important community organization.

Valerie and Mike Corral will be at the screening, in addition to directors Charlie Hall and Bevin-Bell Hall.