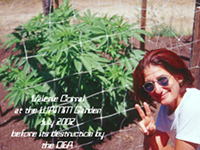 The Wo/Men's Alliance for Medical Marijuana (WAMM), a collective providing cannabis under California’s 1996 Compassionate Use Act (Prop. 215), along with the city and county of Santa Cruz, have reached a settlement in their unprecedented lawsuit against the federal government. The suit, Santa Cruz v. Holder (previously Santa Cruz v. Gonzales and originally Santa Cruz v. Ashcroft), began in 2002 and aimed to halt the Bush Administration's interference with state medical marijuana laws.

WAMM's case was prompted by the US Drug Enforcement Administration's raid of their medicinal garden in Davenport on September 5, 2002, in which armed agents terrorized residents and patients, and seized more than 160 cannabis plants.

On January 22, 2010, Valerie and Michael Corral presented a statement to the US District Court in San Jose on behalf of themselves and other members of WAMM. In conclusion, they assert:

"We hope that over time the federal government will recognize its senseless position on medical marijuana and will formally codify protections for sick, dying and marginalized patients who have the right to use whatever substances their physicians recommend to ease suffering. We are nonetheless, heartened by the federal government's newly declared position suggesting deference to state medical marijuana laws and we are extraordinarily proud of our Collective's role in effecting this change in policy. However, should our government break their word and again pursue their senseless assault on the sick and dying, we stand at the ready and we promise to hold them accountable in a court of law."