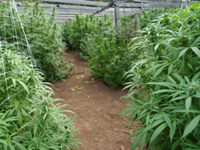 The Santa Cruz, CA collective Wo/Men's Alliance for Medical Marijuana (WAMM) won a major award in August from The Society for the Study of Social Problems, a national organization of sociologists. The SSSP’s "Social Action" award and a check for $1,000 are given each year to a not-for-profit organization which embodies and enacts the social justice goals of the SSSP.

For a decade and a half WAMM has collectively grown and given away some $29 million dollars in cannabis and is the subject of a book by Wendy Chapkis and Richard Webb, Dying to Get High: Marijuana as Medicine. Another dramatic chapter in the history of WAMM occurred in August, when collective members had to fight off a forest fire to save their medicine garden.