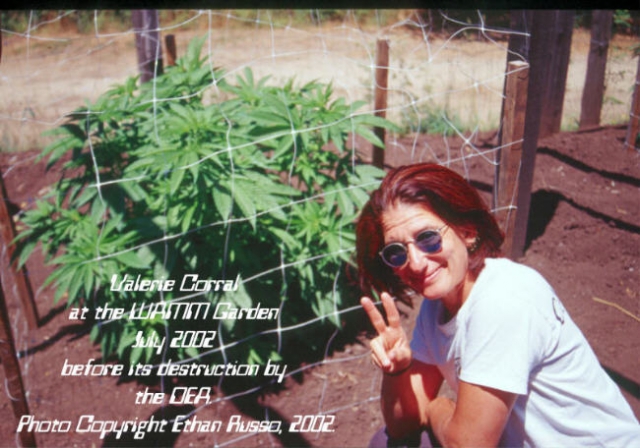 original image (650x456)
January 22, 2010 Statement of Valerie and Michael Corral on behalf of themselves and other members of WAMM

We begin this missive fully recognizing the advantage that our model of governance provides. Few sovereign states have employed such a separation of power. This fundamental tenet provides a rare opportunity to offer our thoughts.

When liberty is at stake the peril of failure threatens the positive consequences of a society. Every monumental change comes at great risk and finally at even greater cost. Yet, it is due to the courage of countless citizens that we are free to write this and because of their struggle to maintain such principles that we are obliged to do so.

Few arguments have been ignored either in support or opposition, legal or emotional regarding the complex and problematic struggle for access to medical marijuana and the relief of suffering that it provides. In the more than seven years that have passed since the DEA raided our home, took medicine from our collective of critically ill patients and hastened their deaths, every day has been marked by the actions of our government. No wisdom can be gained without experience and no experience without discomfort. These have been discernibly uncomfortable years. Everything has changed, yet one thing has not ceased; that is the unrelenting death of WAMM members, now numbering more than 200. Last week my brother’s death increased our number of losses. Having the fortune to sit at the bedsides of people during the most important times of their lives, as they face death, has informed us that there is no man- made law that governs death and no experience short of the journey itself that can enlighten the bewildered mind. While we may bow to the mystery that has yet to be revealed, one thing is certain, there is no better agent of truth than one who rests in the experience.

A society is judged by the way it treats its most vulnerable citizens. The interest of society is to protect the rights of its citizens, to preserve civil and natural liberty. That really is our government’s job. It is the business of human beings to concern ourselves with the well being of others. It is our social obligation to encourage right action and to assuage suffering. But what then if our efforts to alleviate pain are at odds with our government? As principled citizens we are faced with the timeless "struggle between authority and liberty.” How is it that this debate persists through the development of governing bodies, partisan lines and countless representatives… for surely every individual enters into a personal contract with suffering when faced with illness. Were it possible for government to endure our pain then perhaps our social obligation would diminish. But this is not the case and so it becomes the very thing that inspires us to seek justice.

Has justice been served in the wake of our struggle? Is it enough that we walk away with a just a wink from the Department of Justice? What concession has our government made? Who offers conciliation in trade for our fathomless loss? What guarantee of freedom to pursue our work is provided? Were it not for the court, then we are afraid our voices would be completely silenced. This leaves us both grateful and troubled.

We wish to be acknowledged as the model for dealing with the issues of poverty and healthcare as no other medical marijuana organization has. We assert that some reparation is due for the casualties realized in the aftermath of the raid; an act so chilling that many members fled from our collective for fear of reprisal, while others died agonizingly because we simply did not have enough medicine to serve them. Their deaths galvanized our efforts and we prepared to endure the obstacles ahead. We gained notoriety for our altruism, but the financial strain wore our foundation threadbare.

Seven years have passed since the day the DEA raided our home and changed our lives and each day we set forth to continue our mission to serve the critically ill and dying, just as we have for more than 17 years. We recognize that it is no small thing for government to concede to actions contrary to law and perhaps, the fact that we persist without interference ought to be enough. But, somehow it isn’t.

We hope that over time the federal government will recognize its senseless position on medical marijuana and will formally codify protections for sick, dying and marginalized patients who have the right to use whatever substances their physicians recommend to ease suffering. We are nonetheless, heartened by the federal government's newly declared position suggesting deference to state medical marijuana laws and we are extraordinarily proud of our Collective's role in effecting this change in policy. However, should our government break their word and again pursue their senseless assault on the sick and dying, we stand at the ready and we promise to hold them accountable in a court of law. 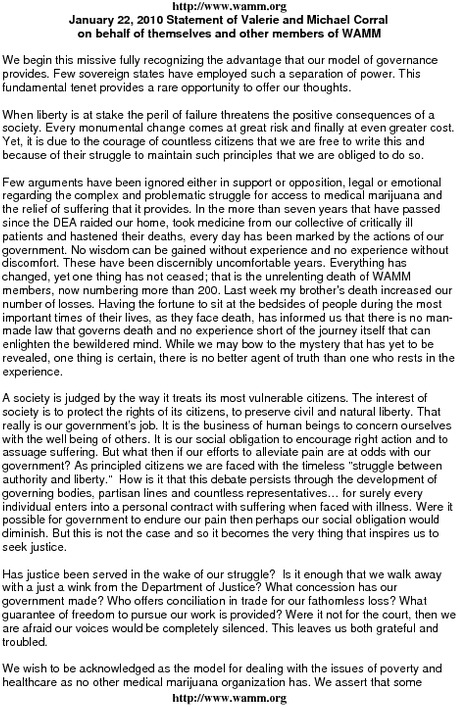 Download PDF (11.9KB)
http://www.wamm.org
§Cannabis Medicine - WAMM
by hampapartiet Friday Jan 22nd, 2010 8:55 PM
Copy the code below to embed this movie into a web page:
Download Video (39.6MB) | Embed Video
September 5, 2002 -- WAMM (Wo/Men´s Alliance for Medical Marijuana) is closed down by the Federal Government and 300 seriously ill people are without medicine.
http://www.youtube.com/watch?v=FMOnoUVdauM
Add Your Comments
LATEST COMMENTS ABOUT THIS ARTICLE
Listed below are the latest comments about this post.
These comments are submitted anonymously by website visitors.