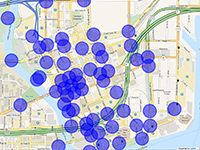 The 2012 Republican National Convention was held in Tampa, Florida from August 27th 28th through 30th. The entirety of downtown Tampa is within the RNC security perimeter. There were demonstrations, rallies, and marches happening throughout the week, albeit relatively small in numbers. Hysterical corporate media reports prior to the RNC — fed by releases from law enforcement authorities — warned of threats from "outlaws and anarchists" possibly targeting the Tampa Bay area with IEDs. Local officials wrote a new anti-protest law, set up security cameras throughout the city, set aside 1,700 beds at the local jail, created a video court system for first hearings and put extra shifts of public defenders on call to quickly process "troublemakers", but the largest protest to date was only 1000 people strong, and that was in nearby St. Petersburg. Tampa officials provided up to 575 portable toilets, two misting stations, and bottled water for demonstrators suffering from Florida’s summer heat, but the city is largely a ghost town other than republican delegates and the police state apparatus. There were just two arrests all week, both under the new city law.

Indybay has reports, photos, and video from throughout, with additional posts still coming in.

August 31st: In the evening, while Mitt Romney was giving his speech to close out this year's Republican National Convention, a protest march left Romneyville. Separately, on the last day of the RNC, a number of activists left Tampa, or finalized plans, to travel to Charlotte, North Carolina for the Democratic National Convention, scheduled for the following week, September 3rd-6th.

August 30th: In the early afternoon, several Earth First! activists used lockboxes across the entrance to stop traffic into or out of one of the largest coal power plants in Florida, TECO's Big Bend power station. An anti-war demonstration was held near the gates of the MacDill Air Force Base in Tampa. That evening, protesters marched from Romneyville in a Silent FTP (Fuck the Police) march. Demonstrators carried trash bags and collected litter from downtown streets, but were stopped by police.

August 29th: Planned Parenthood sponsored a rally for women's reproductive rights in the afternoon. Late in the day, labor organizers held a march throughout the downtown area near the "free speech zone" featuring skits that drew attention to republicans' anti-worker policies.

Photography Is Not A Crime (Interview with Carlos Miller)

August 28th: The largest event of the day was the Rally and March Against Voter Suppression @ the RNC in Ybor City, inside the security "event zone." Code Pink attempted to make a citizen's arrest of Condoleezza Rice for "war crimes" at an event connected with the RNC. Also, on Tuesday were a "How Wall Street is Burning Democracy" workshop in Romneyville, a Really Really Free Market at Occupy Tampa's still-going Voice of Freedom Park encampment, and another evening RNC concert.

August 27th: Protest highlights for the first scheduled day of the convention included the March on the RNC, the March for Our Lives, the parading of hundreds of police and deputies in riot gear, and an evening Roving Radical Dance Party. There was also an "Is This What Democracy Looks Like?" RNC discussion panel in St. Petersburg and a "Celebration of Resistance" musical show in the evening. The RNC itself was cancelled for the day due to the threat of then-Tropical Storm Isaac. The second arrest of the RNC was made after the March for Our Lives when one demonstrator refused to remove a mask, now illegal as per the new anti-protest law.

March for Our Lives: video |

March for Our Lives: photos |

March on the RNC: video |

March on the RNC: photos |

Welcome to the Ghost Town/Police State of Tampa |

Videographers Get detained, RNC Police State Gets Rained Out |

August 26th: The first arrest of the RNC occured when police allegedly noticed a man with a machete inside of the RNC security "event zone," which is now illegal as per the new anti-protest law passed by Tampa politicians.

Eve of 2012 RNC: Disruptions and Marches Begin, Convention Delayed Due to Storm |

August 25th: Corporate media reports flood the airwaves with fear-mongering, warning about "anarchists and law-breakers" disrupting the RNC, including with improvised explosive devices.

RNC in Tampa: What not to bring! | Tampa prepares for best and worst |

Tampa is watching you at the 2012 RNC | Occupy Tampa’s Official Statement Regarding the RNC | Earth First! group calls for eco-action during RNC in Tampa | Statement on the Police Misconduct in West Tampa on the Evening of 8/17/2012

If you have 2012 RNC or DNC reports, photos, audio and video, publish them on Indybay!