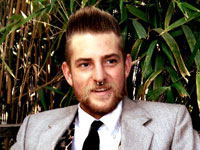 On August 10th, Thomas Matzat and supporters appeared before the Yolo County District Court for a pre-trial hearing. Thomas is being charged with five counts of felony vandalism, fourteen counts of misdemeanor vandalism, and one misdemeanor charge for “possessing a marking substance with the intent to commit vandalism” (California Penal Code 594.2a).

Thomas is a junior at UC Davis, studying Fine Art. Over the last year, Thomas has used his artistic talent to create oil paintings, screen-prints, banners, and tee-shirts in support of the Occupy movement, and he has also been active in the student movement against university privatization. Last fall, Thomas experienced nerve damage in his wrists due to police brutality during the November 18th UC Davis pepper spray incident.

At Thomas’ arraignment on April 20th, District Attorney Michael Cabral filed the twenty charges against Thomas, saying they were able to identity him as the graffitist based on video footage from a security camera. At the pre-trial hearing on August 10th, however, Thomas’ pro bono legal team provided evidence that police lied in a search warrant affidavit about the security footage.

Thomas is also being charged separately as part of the Davis Dozen for allegedly blockading a corporate bank on the UC Davis campus.