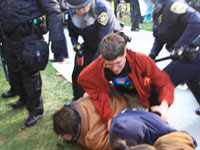 On the afternoon of Friday, November 18th, UC Davis Chancellor Linda Katehi ordered the UC Davis police to clear student protesters from the main quad on campus. Many of the students had participated in a rally on November 15th against tuition increases and police brutality on UC campuses. The rally took place in solidarity with students and faculty who were bludgeoned with batons, hospitalized, and arrested at UC Berkeley on November 9th. Those protesters had linked arms and held their ground in defense of tents they set up beside Sproul Hall. In a gesture of solidarity with those students and faculty, and the national Occupy movement, students at UC Davis set up tents on the main quad. Police in riot gear arrived to remove the tents, and students responded by sitting in a circle and linking arms around the tents. Without provocation, police pepper-sprayed the students.

Chancellor Katehi's actions have been met with international shock, outrage, and condemnation. The Davis Faculty Association Board has called for the immediate resignation of Chancellor Katehi, stating, "The Chancellor’s authorization of the use of police force to suppress the protests by students and community members speaking out on behalf of our university and public higher education generally represents a gross failure of leadership. Given the recent use of excessive force by police against 'occupy' protestors at UC Berkeley and elsewhere, the Chancellor must have anticipated that, by authorizing police action, she was effectively authorizing their use of excessive force against peaceful UCD student protestors. The Chancellor’s role is to enable open and free inquiry, not to suppress it."

UC Davis students, alumni and others will converge on Monday, November 21st at noon on the quad to show solidarity and support for the students who were beaten and pepper-sprayed, and for a conversation about the university’s future.