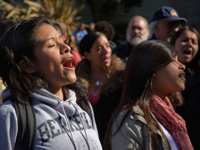 Thursday Nov 17th, 2011 3:36 AM : #OccupyCal about to be raided. Five minute warning given by UCPD riot police. Most occupiers retreat, some still remain.
Students at UC Berkeley walked out of classes on November 9th to protest budget cuts and rising tuition, and to support the Occupy Wall Street demonstrations. The rally protested economic inequality and its impact on students, the poor and the young — in the words of the occupy movement, a protest by the 99% of the people who are exploited by a system that only benefits the top 1%. Later that night, students were beaten by police batons as they tried to set up tents in Sproul Plaza, and six students and an assistant professor were arrested. Students continued to occupy the plaza without tents, however.

Occupy UC Berkeley was given terms from the UC which severely restricted the students' rights to assembly and free speech. The terms the UC tried to place on the students went beyond no tents. Students were denied sleeping bags, and even denied the right to sleep at night. Even in the event of rain, no tents would be allowed, only tarps. The protest was only permitted for one week. Amplified sound was only permitted three hours a day; from noon until 1PM, and from 5PM to 7PM. Further restrictions came from the police, including no signs or banners, and no bullhorns (even if not in use).

UC Berkeley police also searched any large backpacks and demanded the ID from individuals wearing large backpacks. UC police stopped and searched at least one medic. The police believed the red cross symbol to be a ruse, and thus searched through the medic's supplies.

According to UC police Capt. Margo Bennett, "the individuals who linked arms and actively resisted, that in itself is an act of violence...I understand that many students may not think that, but linking arms in a human chain when ordered to step aside is not a nonviolent protest."

Occupy Cal, in solidarity with Occupy Wall Street and the Arab Spring, have called for an open university strike on Tuesday, November 15th following the actions of police brutality on non-violent civil disobedient protesters on November 9th.