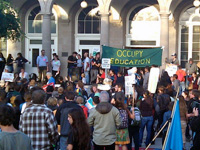 On November 9th, over 500 students at the University of California, Santa Cruz joined various local workers' union members and Occupy Santa Cruz protesters for "Occupy Education," a protest against corporations and corruption in education. Protesters gathered at noon for a rally on the UC campus before taking to the streets. The group marched down Bay and Mission streets, blocking traffic on several major streets along the way.

Demonstrators made their way to the US Post Office downtown where another rally was held. UC students gathered with various union leaders, K-12 teachers, and other community members to demonstrate against the latest proposed tuition hikes. The UC Regents are meeting on November 16-17 at UCSF Mission Bay to vote on a tuition increase of 16% each year for the next four years. The resulting price for one year's tuition would be about $21,800.

At the same time, students at UC Berkeley were beaten by police batons as they tried to set up tents in Sproul Plaza, and six students and an assistant professor were arrested. Students continued to occupy the plaza without tents, however.

more photos: Part 1 | Part 2 | Part 3 | see also: The Budget Cuts and the Privatization of the University of California