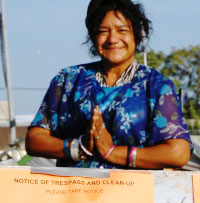 Homeless People in Fresno and Their Allies say, "Stop the Evictions!"
Fresnans Resist Latest Attack on The Homeless

The City of Fresno has announced a plan for the massive evictions of the homeless, starting at 7 a.m. on Thursday, October 27th. Speaking in front of City Hall on Wednesday, homeless people and their allies said the planned eviction was heartless and cruel. Community Alliance newspaper editor Mike Rhodes said “destroying their modest shelter and chasing them with a stick from one vacant lot or sidewalk to another will do nothing to help their lives or to end homelessness in Fresno.”

A delegation from the Catholic Diocese meet with Fresno mayor Ashley Swearengin, who told them that the homeless were being forced to move so construction on an overpass could take place and that she would find housing for all of the homeless in downtown Fresno within a year.

Bill Simon, chairman of Bishop John Steinbock Homeless Advocacy Committee, said “here are at least 5,000 unsheltered homeless living in Fresno and probably 20,000 more sleeping on a friend's floor or couch and days away from becoming absolutely homeless. A few years ago, FUSD (Fresno Unified School Dist.) estimated there were 3,000 homeless students in Fresno. While housing is the best solution to homelessness, we cannot give housing to 25,000 people in 6 months or a year or 2 years. As a temporary solution, we must provide safe camps with trash bins and water and porta-potties for the homeless.”

A call to action has gone out in the community to protest the planned eviction of the homeless that will start at 7 a.m. on Thursday, October 27 on Santa Fe, just south of Ventura street. (